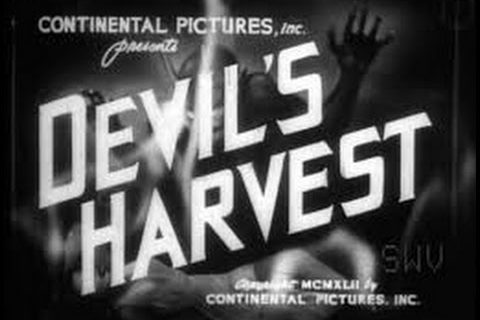 We love combing the Web for clues about how something as innocuous as cannabis became public enemy number one, so here’s a gem, Devil’s Harvest, found by Herb’s ChristopherTeague. If you can get beyond tears over how many years of potential healing were wasted on account of such ridiculous propaganda, the absurdity will make you laugh. Enjoy! TCR Editorial Staff

The history of propaganda against cannabis is a long and disturbing one. If you haven’t heard of Reefer Madness or the Devil’s Harvest, or been subject to the ridiculous anti-marijuana ads of today, consider yourself lucky. This is one of the classics, and for hilarity’s sake, it is worth the watch. This is what our grandparents grew up with.

From the hot-dog stand selling “reefer” across from a school, to the parties that put teens into the vile grips of promiscuity, dancing in their underwear, and murder, the sad twists and poor acting in this scare film of a bygone era into the category of moral propaganda that made America what it is today, unfortunately.

A joint selling hotdog stand owner gets tired of being muscled by organized crime, and the boss decides to spread his enterprise by getting all the youngsters addicted to the Devil’s Harvest. Girls are tricked into being showgirls, then liquored up and sold off to pay drug debts.

The moral of the story

Besides the shame and guilt, Devil’s Harvest was designed to instill in its viewers the idea that everyone has to bow to authority, as the cops manipulate innocent young adults into acting as their undercover agents, because “it is the responsibility of every law-abiding citizen to help bring criminals to justice.”

The film ends up, if you watch with awareness, focusing more on the dangers of organized crime than marijuana. The two are invariably linked in post-alcohol prohibition minds as gangsters like Al Capone made organized crime fame bootlegging booze.

“A vicious racket with its arms around your children!”

“The smoke of Hell!”

Overall, it plays out as a detective story, but The Devil’s Harvest is a thinly held together expose-style film that played to audiences of millions in the 1940’s, helping to fix the minds of prohibitionists onto a new target, marijuana.

Born and raised in West Texas, Chris has criss-crossed the country and explored more careers than he has years on this Earth. From lab-technician to landscaper, salesman to finance specialist, the only constants in his life have been his writing, and passion for cannabis. His travels and experience give him a unique perspective on the world. Poetry, short stories, and novels, both published, and those forever in revision, surround him like a smoky haze. Chris is a proud father, raising two small boys with the love of his life, who will one day share their hearts and minds to change the world.