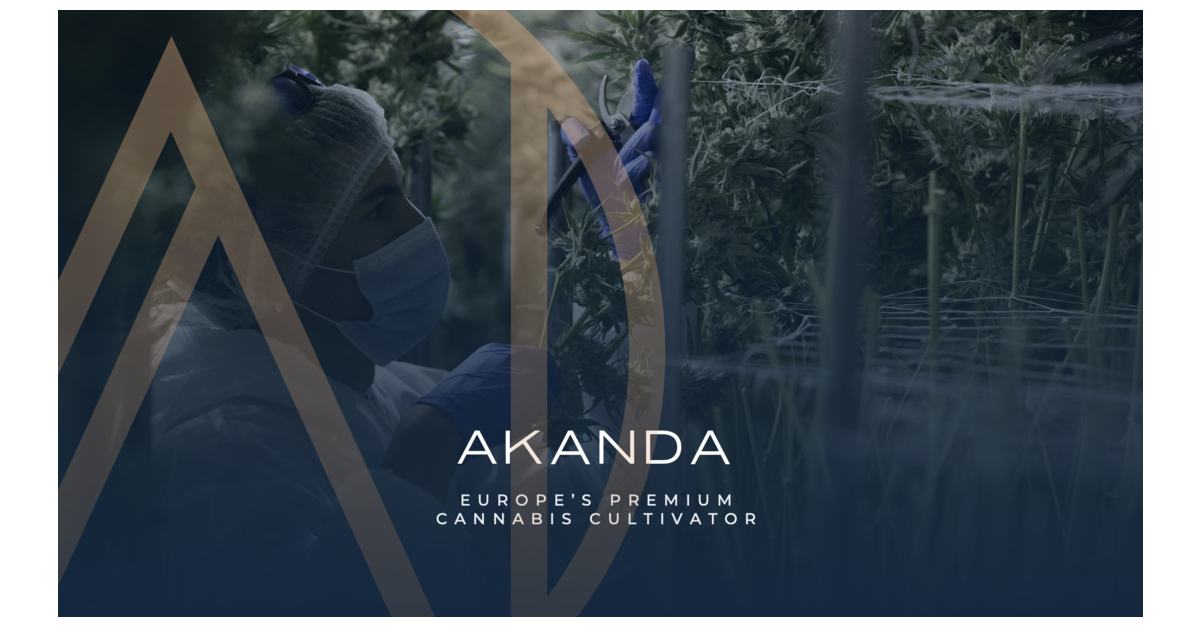 LONDON–(BUSINESS WIRE)–Medical cannabis cultivation company Akanda Corp. (“Akanda” or the “Company”) (NASDAQ: AKAN) (Frankfurt: Y23) is affirming a shift in strategy to become a significant player as a premium EU GMP cultivator in Europe, targeting 10% market share in the German medical cannabis flower market in the near term. Akanda also has a cultivation and dispensary licensing deal with Cookies® in Portugal. These steps put Akanda on firm footing to serve the future regulated adult-use markets in Europe once established.

The Company recently announced its first shipment and sale to Germany from its EU GMP-certified indoor premium medical cannabis cultivation operation in Portugal. An agreement was made to deliver at least 1,000 kilograms of high-grade medical cannabis flower to Germany through Cansativa, one of Germany’s leading medical distributors. The premium EU GMP flower supply agreement with Cansativa is one of the largest in the European medical cannabis industry. Germany’s health minister recently released initial guidelines for adult-use legalization in country. While questions remain around the final implementation, their action serves as a beacon for other European countries considering legalization, such as Portugal. Akanda is poised to supply these future adult-use markets with premium quality cannabis flower when laws become established.

Tom Flow, Akanda’s COO, added, “The Company now has Cookies genetics in Portugal and in production. Akanda plans to release a selection of top Cookies strains in 2023. The Company is also evaluating plans to expand grow rooms at the Sintra indoor facility and add custom grow pods at our Aljustrel site to rapidly scale production of premium indoor cannabis to meet increased demand from EU markets.”

Akanda’s strategy shift comes after considering the unauthorized commencement of liquidation proceedings in respect of Bophelo Bio Science & Wellness (Pty) Ltd. (“Bophelo”), the Company’s subsidiary in Lesotho, Africa. As previously announced, on July 15, 2022, a Lesotho Court granted an order appointing Mr. Chavonnes Cooper of Cape Town, South Africa, as liquidator of Bophelo to maintain the value of the assets owned or managed by Bophelo. It is Akanda’s position that such court order resulted from an application commenced by Louisa Mojela, Akanda’s former executive chair, and Ms. Mojela’s trust, Mophati Matsoso Development Trust, without the Company’s knowledge. Ms. Mojela acted unilaterally for her own interest without warning or notice, in breach of contract, fiduciary duty, and in a manner that was likely to bring the Company or Group Companies into disrepute or was materially adverse to the interests of the Company or Group Companies. After careful consideration, Akanda has made the decision to cease its involvement in Bophelo’s Lesotho operations and assert its and its affiliates’ rights as a creditor of Bophelo instead of seeking to contest the liquidation proceedings as previously announced.

Mr. Virk continued, “The Company has been forced into a position to exit Lesotho due to the unauthorized liquidation of Bophelo. However, having a presence in Africa was always about building for the long-term and making a social impact on Lesotho’s communities. Fortuitously, we have seen higher demand from German buyers for products produced in Portugal over Lesotho due to quality and evolving EU cannabis import regulations. As such, Akanda is proving that it can more than offset this African cultivation operation with its Portuguese operation to meet German demand.”

Concluding, Mr. Virk stated, “Financially, Akanda, without Bophelo, is on an accelerated path to operational profitability and positive free cash flow. As a team, we are focused on our core markets: Germany and the UK. The Company is actively negotiating a number of commercial agreements, all of which will utilize our Portuguese and UK operations.”

The company is pleased to announce a new investor presentation which can be found on our website at: https://www.akandacorp.com/investors/presentations/default.aspx.

Akanda is an international medical cannabis and wellness platform company seeking to help people lead better lives through improved access to high quality cannabis products. Akanda’s portfolio includes Holigen, a Portugal-based cultivator, manufacturer and distributor with a prized EU GMP certified premium indoor grow facility; and CanMart, a UK-based fully licensed pharmaceutical importer and distributor which supplies pharmacies and clinics within the UK. The Company’s seed-to-patient supply chain also includes partnerships with California-based Cookies®, one of the most globally recognized cannabis company in the world; Cansativa Group, a leading importer and distributor of medical cannabis in Germany; and Cellen Life Sciences’ Leva Clinic, one of the first fully digital pain clinics in the UK.