Are Your Favorite Candidates In Favor of Legalization? 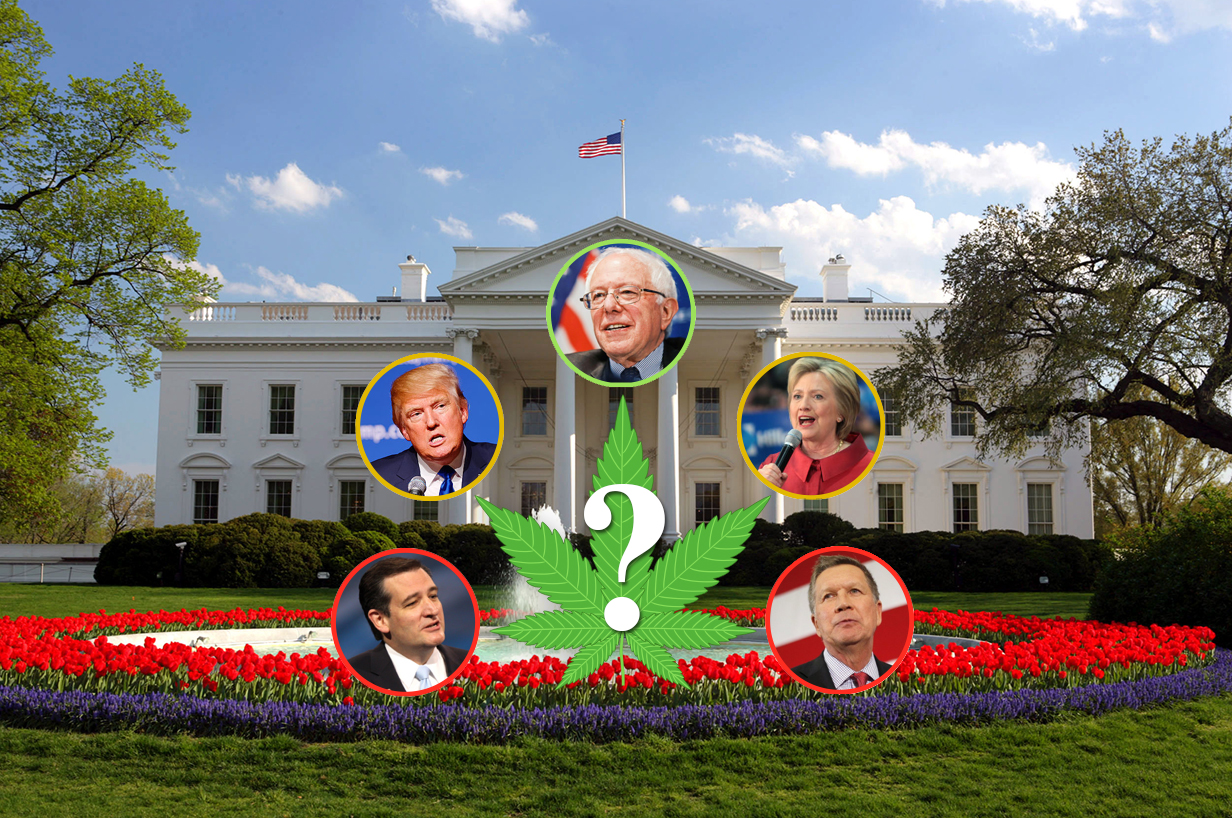 The outcome of the 2016 presidential campaign could determine whether an end to prohibition is in store any time soon. So who are the candidates in favor of legalization, or against it? Most have been luke warm or down-right against marijuana in the past. But given the rising acceptance nationwide, with more than 53 percent of Americans in favor of some form of legalization, candidates who were once against it are beginning to soften their stance.

The Marijuana Policy Project (MPP) has graded each of the candidates on their position going into the 2016 election cycle. To gain a clearer picture on how the 49th president could respond to legislation during his or her own term, we decided to look into each candidate’s past and present position on legalization to make an educated guess about how they’d respond if federal reform took place. Here they are in ascending order from least to most likely to support federal legalization of marijuana if such legislation were passed in Congress. As chance would have it, our own projections coincide with the grade each received.

Let’s start with the GOP candidates in favor of legalization: Zero. 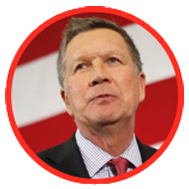 In 1999, when John Kasich was still in Congress, he was a vocal opponent to any drug reform. When HR 3064 was passed to provide $430-plus million dollars funding to Washington DC, Kasich pushed for provisions that would ban the use of federal funds for needle exchange programs and bar enactment of an approved ballot initiative to legalize the medicinal use of marijuana, among others.

In a 2012 interview Kasich told the OhioCapitalBlog, “On medical marijuana, doctors that I know tell me we don’t need that, there are other ways to [treat pain].”

When a Cincinnati NBC affiliate probed the governor about whether he’d support medical marijuana following a 2014 story about a local epileptic little girl who needed CBD treatment, Kasich responded that he’s for keeping drugs out of the hands of children so, “No, I’m not for it.”

When Hugh Hewitt asked Kasich about his thoughts on passage of state legalization in Colorado and Washington during an interview in April last year, he said, “The people in those states have voted that way. The federal government has decided to kind of look the other way. I feel very strongly in my state, I’m going to oppose, and they’re going to put something on the ballot to legalize drugs. I’m totally opposed to it, because it is a scourge in this country. Now I would have to give it thought as to, I probably would not from the standpoint that the states have gone forward to prove that. I haven’t thought about this. I’d have to give it a little thought.”

More recently Kasich has eased up on the issue publicly. At a town hall in February this year, he seemed more closely aligned with Cruz’s laissez faire approach stating that states should “probably” be allowed to establish their own laws. He went as far as to say, “I think we can look at it,” although, on several occasions, his home state of Ohio tried with no luck to get medical marijuana on the ballot. Despite polls indicating widespread acceptance of, at the very least, medical marijuana, no measures have ever made it past the Ohio State Legislature.

As for how he might respond to any federal legalization measures as president, the end of the Hewitt interview in 2015 was probably a good indicator: “…In my state and across this country, if I happened to be president, I would lead a significant campaign down at the grassroots level to stomp these drugs out of our country.” 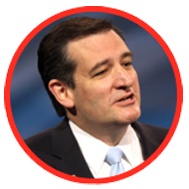 Of all the presidential candidates, Texas Senator Ted Cruz is the second biggest skeptic when it comes to the issue of marijuana. In January 2014, he described the Justice Department’s prosecutorial restraint, which is designed to respect state policy choices, as an “abuse of executive power.”

As Cruz has vascillated on his stance, where he’ll ultimately land is a crap shoot . At a January 2014 event in Texas, he said there are “some reasonable arguments on that issue.” But then, last year, he openly criticized President Obama for failing to enforce federal marijuana laws in states that had legalized marijuana for personal use. “Mind you these are criminal laws,” Cruz said in a 2015 interview for Fusion.net. “These are laws that say if you do ‘X, Y, and Z’ you will go to prison. The president announced, ‘No, you won’t.'”

When new public opinion polls showed rising acceptance of legalization just as the GOP race gained steam, Cruz began to change his tune. In March last year, he told the Texas Tribune, “I don’t support drug legalization, but I do support the Constitution. I think individual states can choose to adopt it. So if Texas had it on the ballot, I’d vote against it, but I respect the authority of states to follow different policies.”

In April, 2015, during an interview on the Hugh Hewitt Show, he said, “[The citizens of Colorado and Washington State] have decided that they want to legalize it. I think it is appropriate for the federal government to recognize that the citizens of those states have made that decision. One of the benefits of it, is we can now watch and see what happens in [there].” Oddly, that statement seemed to have been adopted out of Hillary Clinton’s play book on the subject, almost verbatim.

Whether he would use executive power to veto any pro-legalization legislation if passed by Congress remains to be seen. Given his disapproval of State legalization, it’s entirely possible. 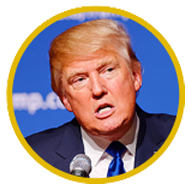 According to MPP, Donald Trump has never been a drug user and doesn’t drink. And yet, in the early 1990s, he made no bones about advocating for legalization of drugs, and not just marijuana.

“We’re losing badly the war on drugs. You have to legalize drugs to win that war,” he told the Miami Herald. “You have to take the profit away from these drug czars.”

Until recently, he has remained rather neutral on the subject on the campaign trail. Whereas his rival GOP candidates have softened their stance considerably to align with their target voters, ironically, Trump seems to have hardened his stance. He’s now more aligned with the party line on marijuana, at least publicly.

In a GOP debate that took place last year in June, he told a CSPAN moderator, “I’d say [regulating marijuana] is bad. Medical marijuana is another thing, but I think it’s bad and I feel strongly about that.” When the moderator asked about what he thought of the state legalization aspect, he replied, “What about the states’ right aspect of it?… If they vote for it, they vote for it… But I think, medical marijuana, 100%. It should be [legal].

As for whether he’d change his mind if elected, there’s no telling. As often as he changes his mind on other issues, it’s a coin toss whether he’d revert to his 1990s stance and support legalization and regulation, or “just say no” and stick with the party rhetoric.

Now for the democratic candidates’ position on legalization: 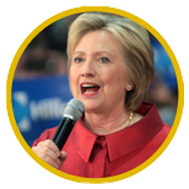 During the October 13 Democratic presidential debate, when Hillary Clinton was asked whether she has taken a position on state legalization laws now that a year has gone by,  she replied, “No,” according to MPP. “Instead, she expressed support for laws that allow legal access to medical marijuana, as well as concern about U.S. incarceration rates, noting that she does not believe people should be imprisoned for marijuana use.”

In an interview the following day, she expressed support for allowing states to adopt their own marijuana policies and said she would not want the federal government to interfere in them.

“Though she’s warmed up a bit to medical marijuana, her idea of reform is to move cannabis from Schedule I … down to Schedule II,” said Russ Bellville in a High Times article last February. “Hillary Clinton is also the Democrat in the pocket of the pharmaceutical industry… [and they don’t] want to see the spread of legalized marijuana competing with some of its best-selling prescription drugs.”

It seems the pharmaceutical industry may have some competition lately. Hedge fund tycoon George Soros, a notorious and highly-vocal advocate for marijuana legalization, recently donated $1 million to Clinton’s super PAC.

Two things about which Clinton doesn’t need to “wait and see” is 1.) her support of rescheduling medical marijuana to allow for medical research, and 2.) her support for reforming the criminal justice system when it comes to prosecuting marijuana offenses. Although she hasn’t explained how she feels rescheduling marijuana would rectify the discrepancy between state and federal law, she see’s the problem with incarcerating minor drug offenders.

“I agree completely with the idea that we have got to stop imprisoning people who use marijuana. Therefore, we need more states, cities, and the federal government to begin to address this so that we don’t have this terrible result of a huge population in our prisons for nonviolent, low-level offenses that are primarily due to marijuana,” Clinton said in a CNN debate in October last year.

When the campaign dust settles, and campaign contributions aren’t influencing her public stance, it’s likely a President Clinton would throw caution to the wind and side with the majority of Americans in favor of legalization. 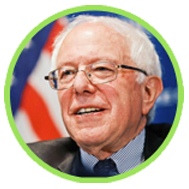 Of all the presidential candidates, Bernie Sanders tops the list of candidates in favor of legalization. His support of cannabis dates back to his days as mayor of Burlington, Vermont.

“When I was mayor of Burlington, a city with a large population, I can tell you very few people were arrested for smoking marijuana. Our police had more important things to do,” he told Reddit AMA in May of 2015.

Just last week, at a town hall in Brooklyn, New York that took place on the heels of Sanders’ big wins in the Colorado and Wyoming caucuses, he emphatically declared: “I think we need to fundamentally re-think the war on drugs.”

During that town hall, he made clear that he believes addiction is a health issue, not a criminal issue and that making it criminal is very much a race issue.

“Blacks and whites use marijuana at equal rates, and yet blacks are four times more likely to be arrested,” he said, explaining that millions of people have been arrested for marijuana, which has destroyed lives and left otherwise law-abiding citizens with criminal records. “Try to get a job [after that], it’s not that easy.”

In November 2015, Sen. Sanders proposed legislation that would allow states to regulate marijuana like alcohol and ensure canna-businesses could access banking services and standard tax deductions that currently are not available due to federal marijuana laws. If passed, the legislation would also remove marijuana from the federal drug schedules and states that legalize marijuana would no longer be subject to federal interventions.

“Having marijuana listed as a schedule I drug alongside heroin is crazy!”

We’re convinced that a Sanders presidency could very well mean the end of prohibition as we know it.

What can you do?

Cannabis Micro-Growing Tips For Those Who Don’t Have Much Space
September 2, 2020

Marijuana In DC: How Did The Pandemic Change The Market Scene?
July 28, 2020

Why CBD Oil Is Used As An Alternative Health Solution
May 14, 2020