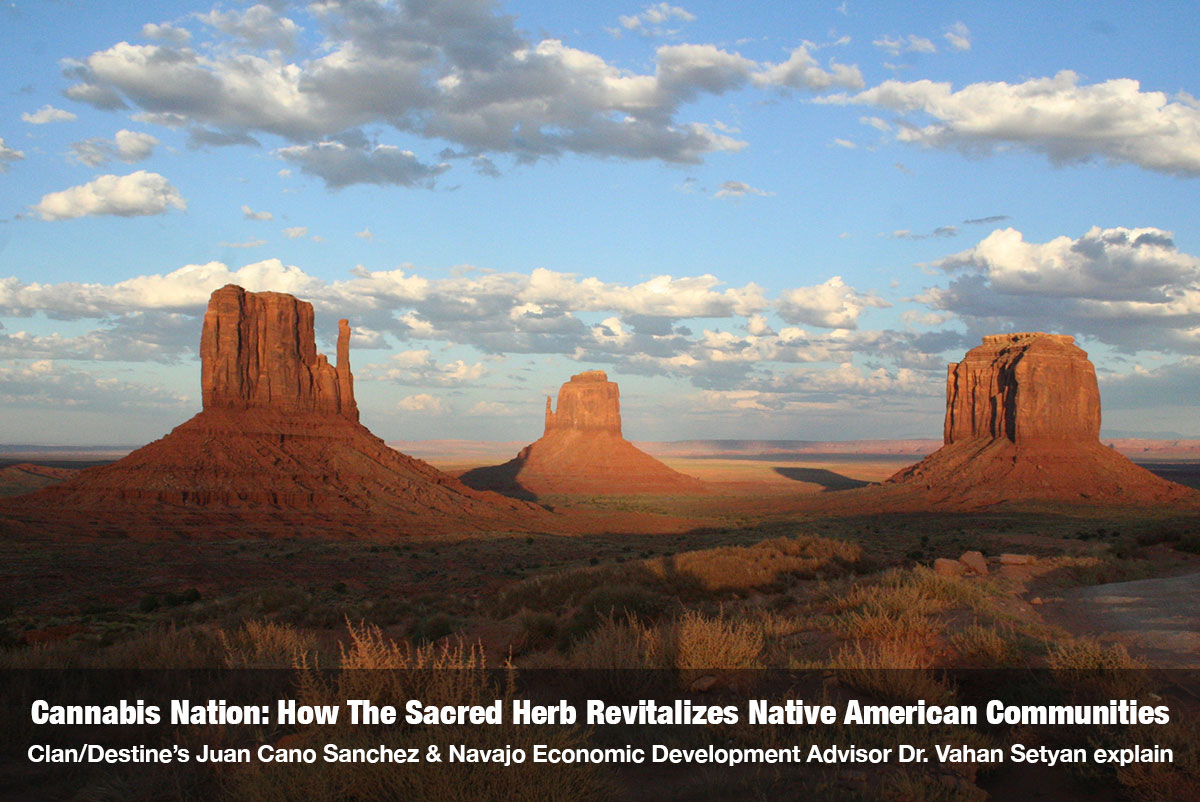 The cannabis industry has triggered a lot of interest and debate for the indigenous people living in sovereign tribal nations in the USA and Canada. For thousands of years cannabis was considered a staple resource that was revered among tribal cultures for its practical, spiritual and medicinal benefits. But ever since the passage of the Controlled Substances Act of 1971, it has been a source of conflict between the U.S. Federal Government and Tribal Councils. Despite autonomy of the sovereign nations and Federal legislation granting sovereign tribal nations authority to pass their own laws pertaining to hemp and cannabis, the federal government has repeatedly imposed sanctions on reservations that fail to comply with federal laws. While cannabis should have offered a way out of the cycle of dependence and poverty, the treaty has been a source of confusion because, as one U.S. Attorney remarked, it encourages investment, but after the investment is made the federal government shuts it down and the investors lose all their money.

This problem persisted on Pine Ridge Indian Reservation, an area covering 20 million acres of land in South Dakota, where members of the Oglala Sioux and Lakota tribes began investing in hemp as a means to generate economic growth, end unemployment and solve environmental issues by replacing petrochemicals with hemp as a renewable resource. Their efforts were thwarted by multiple DEA raids resulting in prosecution and the destruction of their crops. Ironically, their persecution for growing the sacred herb, a sustainable alternative to fossil fuels, was dwarfed by a greater confrontation with the federal government for protesting the Keystone XL Pipeline that threatened to not only disrupt the ecological balance tribal lands but contribute to the escalating climate crisis.

While the conflicts with the DEA over hemp and cannabis have diminished some in recent years, a recent executive order by the Trump administration has reversed the Obama era directive to stop the Keystone XL Pipeline. Under the new order, a militarized police force was directed to impose brutal force if necessary to remove activists who dare to protest the destructive project. The bigger irony is that the crackdown on peaceful protesters will be paid for by a so-called Peace Fund.

What is important to note is that there is untapped power among indigenous people to regain control of their own destiny but it will take education and funding for them to realize it. Hemp and cannabis can play a major role if they choose to embrace it. Now that Hemp is legal everywhere in the U.S., there is an opportunity for them to reclaim it as a sustainable cash crop that will not only provide a lucrative economic boost for reservations but, with the right investment in infrastructure, could enable them to take the lead in replacing fossil fuels for a more sustainable future. Same goes for medicinal cannabis, which they are free to cultivate, research and distribute within their sovereign nations without interference – should they exercise their right to do so.

That’s the topic of today’s show and something our guests, Juan Cano Sanchez and Dr. Vahan Setyan know a lot about.

Juan Cano Montego Sanchez is a dynamic entrepreneur and Principal Member of Linear Consultants LLC, President of Silver Moon Productions, Chief Executive Officer of Freedom Services LLC, and Founder and Director of Operations of Operation Peace Project, a tribal 501(c) non-profit organization. Serving in the field of psychiatric nursing for decades in Arizona and working with institutions such as Summit Place, Victory Place and Desert Vista Hospital, he joined and co-founded the Native American healthcare initiative on palliative services – Palliation Collaborative, LLC, a chronic disease prevention, management and palliation network serving veterans, urban Native Americans and underserved communities throughout the U.S., expanding the collaborative and associations of healthcare professionals and community leaders to battle chronic disease management and end-of- life care for the terminally ill children, elders and veterans. Throughout his life, he has worked diligently to raise awareness of and help prevent teen and veteran suicide through music arts, entertainment, media, movies and community events. A person of Lakota, Pueblo, and Spanish descent, Cano is also the Frontman and Lead Vocalist of Clan Destine, winner of a Native American Music Award in the category of Pop and Rock. Host and Executive Producer of CLAN-DESTINE LIVE online variety show, Clan-Destine received the Governor’s Award of Excellence by the State of Arizona. He cherishes and embraces the love and respect of his wife, children, friends, family and the communities he serves.

Dr. Vahan Setyan is an economic development advisor and a recognized expert in urban and tribal healthcare development, implementation and management. He currently serves as an Authorized Agent and Economic Development Advisor in the Navajo Nation under the auspices of the San Juan River Navajo Nation Farm Board on federal and foreign affairs related to strategic business implementations in industries such as energy, healthcare, agribusiness, banking, gaming, hospitality, and technology. He is also Chief Executive Officer and founder of Native American Pharmacy and NutraNative Corporation, and as Founder of Palliation Collaborative, he recently brought, for the first time in history, hospice and related services to the Navajo Nation, Executive Emeritus of Sacred Canyons Project, a non-profit to serve tribal healthcare and economic development needs. In 2006, he received a permanent honorary membership to Psi Chi, the International Honor Society in Psychology. In November of 2014, Mr. Setyan received the Elite American Executive award by National Council of American Executives. In April 2019, he was selected for the Top 100 Healthcare Leaders award by the International Form of Advancements on Healthcare. In June 2019, out of 90 nominees, he was one of the top 5 finalists in the 2019 Outstanding Alumni Award. Mr. Setyan serves as a Board Member of a southern California-based non-profit healthcare organization and Board Member at an Arizona- based non-profit hospice organization. He is also a participating member of Association of Former Intelligence Officers.

If not for the generosity of our partners and sponsors, we wouldn’t be here! We’d first like to express gratitude for our radio sponsors Blue Mountain Energy and Cannasphere Biotech. We are grateful! Many thanks go to Erik Godal for our theme “Evergreen,” and to Cano of Clan/Destine for the music track used in this show. We’d also like to shout out to XRQK Radio Network and Society Bytes Radio Network for broadcasting our show and Cannabis Radio for helping us spread the word online. Cover image: © Snowden Bishop 2020, All Rights Reserved