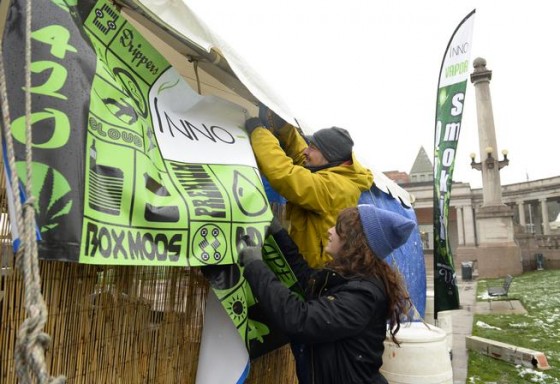 The weekend’s snow shut down Denver’s annual 420 marijuana rally, but organizers are now hoping to pull together an extravaganza at one of the city’s premier entertainment venues.

“I’m not ruling out Sports Authority, I think it is a possibility,” said Rob Corry, attorney for the Denver 420 Rally.

“These performers are high-level, plus you have the cultural significance of Denver and the 420 rally, this is ground zero for ending marijuana prohibition.”

More than 100,000 pot enthusiasts were expected to attend the gathering on Saturday at Civic Center Park.

Organizers have said they will not refund tickets for the event, which was postponed Saturday morning because of wet, snowy weather. Although the event is free, organizers sold special access passes.

“I wouldn’t rule out doing it at Civic Center Park,” Corry said. “We have got to talk to Denver about that.”

But the park in Downtown Denver is busy during the summer and many events are already scheduled, said Cynthia Karvaski, spokeswoman for Denver Parks and Recreation.

The department is willing to reschedule the event at the park, “but right now I doubt that anything is available,” Karvaski said.

Other possible options for a rescheduled pot party are Red Rocks, owned and operated by the City and County of Denver, Coors Field, Fiddler’s Green, Infinity Park and Dick’s Sporting Goods Park.

“We haven’t narrowed it by any means. There are many options on the table,” Corry said.

The city of Denver will work with event organizers to reschedule the rally.

“The city is open to working with the event organizers to consider their options,” said Grace Lopez Ramirez, of the Denver Office of Special Events.