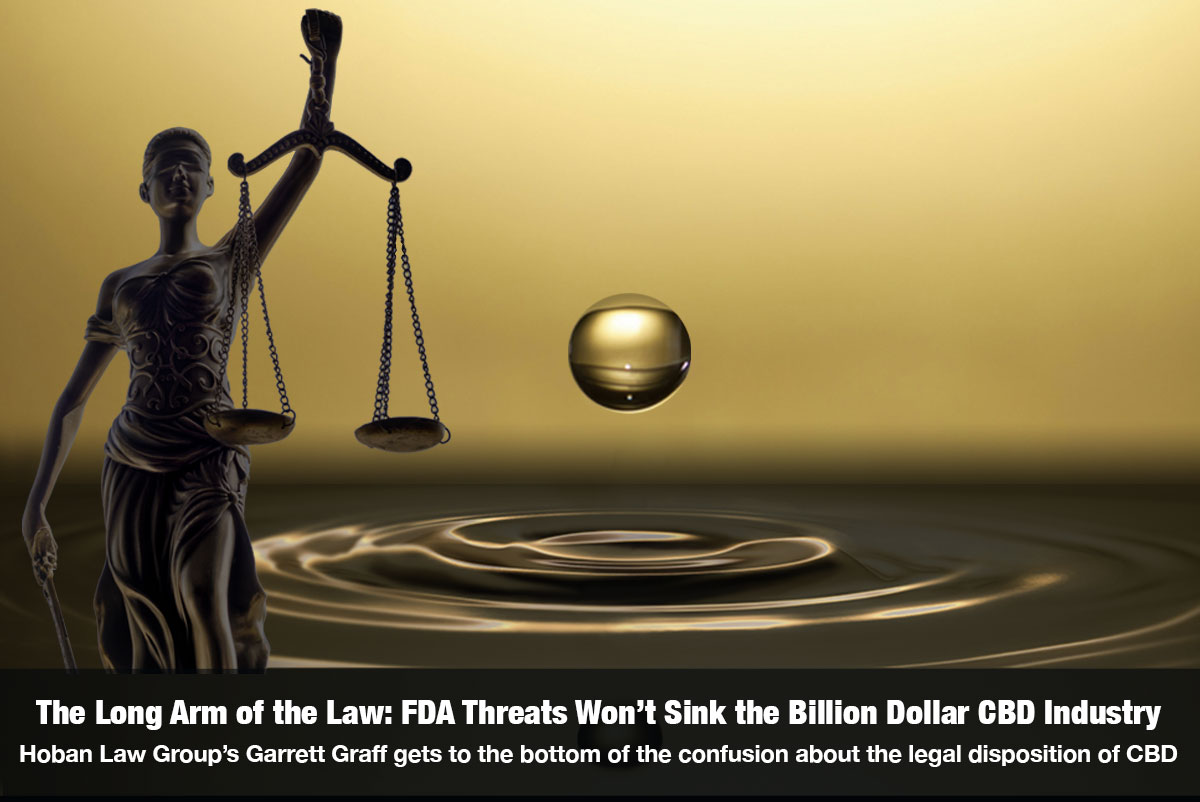 We have spent a lot of time lamenting about the absurdity of the FDA’s hardline position about CBD ever since Congress passed the landmark hemp legislation in the 2018 farm bill. Despite the authors’ concise language that clearly legalizes hemp and all of its natural derivatives, the FDA seems to have its own interpretation about the legal disposition of one of hemp’s molecular nutrients, cannabidiol (CBD). For whatever reason, the agency is intent on strong-arming the industry into compliance with its arbitrary new rules and enforcing its self-administered policy, which it has no legal grounds for enforcing.

Suffice it to say, their scare tactics have had a chilling effect and created a great deal of confusion about what’s legal and what’s not – throughout the entire industry. And that’s a shame considering that the farm bill authors sought to end the confusion caused by a series of regulatory twists and turns starting with the DEA’s move to assign a code for CBD in Schedule 1 to differentiate it from marijuana in the Controlled Substances Act.

Despite the looming threats on the part of the FDA, the CBD industry continues its unprecedented upward trajectory with sales already pushing a billion dollars and credible estimations that the industry will top $25 Billion in the next decade. While those threats have failed to significantly slow the industry’s progress as of yet, the agency has already begun mongering fear with its recent barrage of cease and desist notices to industry stakeholders and several coordinated inter-agency raids confiscate CBD products from legal points of sale for no legitimate reason. And then, of course, there are ongoing exercises of futility in states where local law enforcement authorities are blatantly disregarding new federal hemp law, most likely out of sheer ignorance. Take for example, the 7000 pounds of hemp confiscated by highway patrol officers in Idaho on its way from a farm in Oregon to a processing facility in Colorado. The driver of the precious cargo just happened to be in the wrong place at the wrong time and now faces felony drug trafficking charges with a mandatory minimum of five years in prison. According to the arresting authorities, the driver violated state law where any traces of THC are deemed to be illicit narcotic substances and possession of any amount is a felony offense, despite the fact that hemp, including its trace content of THC, is now a federally-legal commodity.

While ignorance on the part of state troopers in one of the last existing states to refuse to implement any form of marijuana law policy reform might be excusable, there is no excuse for the FDA to blatantly disregard the will of Congressional lawmakers, and the will of the people they represent.  While it may seem like an abuse of power for the FDA to threaten an industry that was fully legitimized by Congress, the truth remains that the 2018 Agricultural Improvement Act handed oversight of CBD substances to the FDA – a move that should have been preferable to keeping it in the hands of the DEA.

But considering that the DEA didn’t waste its time enforcing CBD violations, the FDA is now create more points of ambiguity in the law, which has been a source of frustration for those of us who need to understand what’s legal, particularly since it appears most governmental agencies like the FDA are approaching regulation from a point of ignorance, if not deception.

Whatever the reason, we were eager to get some answers. And for that, there’s no one more qualified than our guest, a senior partner at Hoban Law Group, Garrett Graff to help us get to the bottom line of the law.

Garrett Graff specializes in all aspects of cannabis law as a Senior Attorney at Hoban Law Group, a firm that the National Law Journal named as a Cannabis Law Trailblazer. He represents clients from both the marijuana and industrial hemp industries in corporate transactional matters as well as civil and commercial litigation cases pertaining to regulatory issues, FDA compliance and other matters including import/export, cultivation, processing and manufacturing, distribution, business establishment and dispute resolution, to name a few. He also frequently works with federal, state and local authorities on policy and enforcement matters. Perhaps most noteworthy is Garrett’s role representing hemp industry stakeholders against the before the Ninth Circuit Court of Appeals, in a case that confirmed that hemp-related provisions of the 2014 Farm Bill would pre-empt DEA authority and the Controlled Substances Act. He also navigating legislative and regulatory frameworks such as FDA regulation FDA compliance with federal, state and local authorities on policy and enforcement matters.

If not for the generosity of our supporters, we wouldn’t be here! We’d first like to express gratitude for our radio sponsors, Sunstate Technologies, C2 | ICS Integrated Compliance Solutions, First Direct Financial, Honor Enterprise Fund and Cannasphere Biotech. We are grateful! Many thanks go to Erik Godal for our theme “Evergreen” and Dr. Bryan Doner for the Medical Marijuana Minute. We’d also like to shout out to XRQK Radio Network and Society Bytes Radio Network for broadcasting our show as well as  Compassionate Certification Centers and Cannabis Radio for helping us spread the word online.