How to Free CBD from the FDA Grasp: Call It GRAS 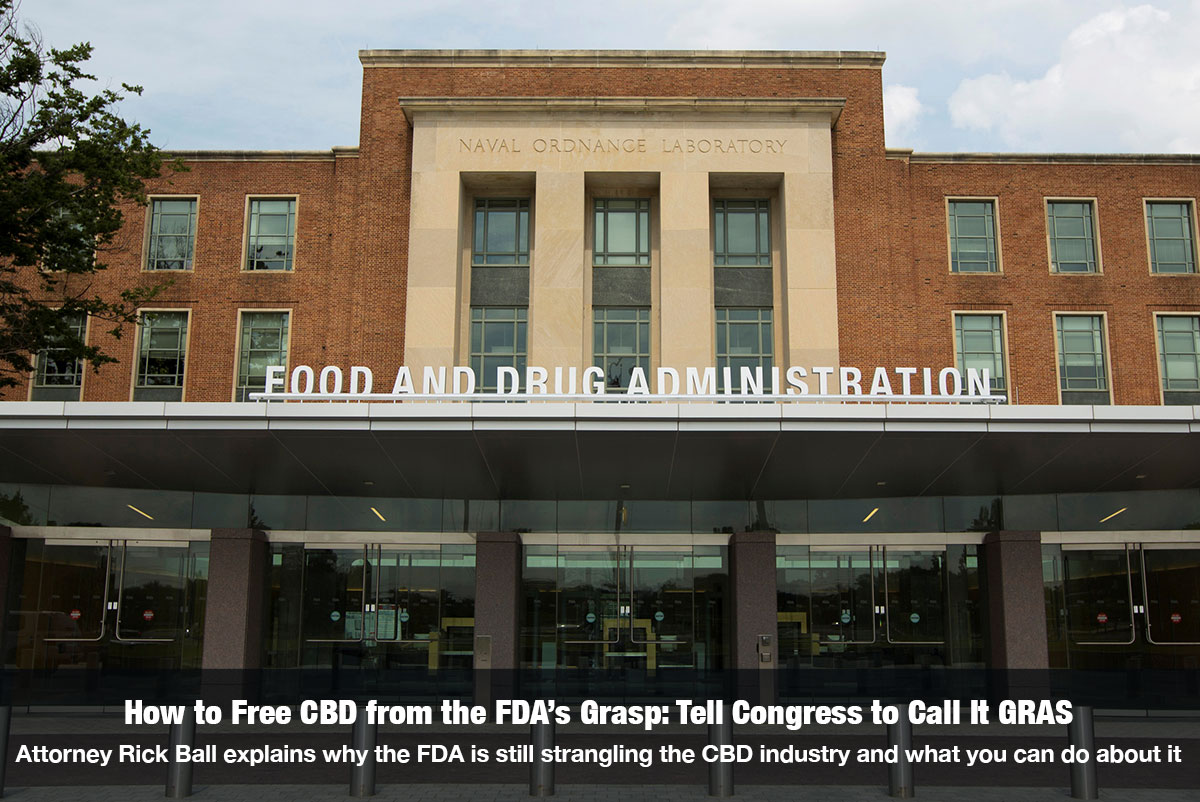 When Congress legalized agricultural hemp with the passage of the 2018 Farm Bill, it seemed like the hemp industry would finally be out of the woods from a regulatory standpoint. So, it defies logic that the FDA is creating obstacles for hemp CBD producers and that every-day people are still being arrested for possession of hemp biomass and extracts.

Just last week, a 67-year-old great grandmother was arrested at the happiest place on earth when a Disney World employee discovered a bottle of CBD in her purse after a routine inspection at the park entrance. You may recall the truck driver who was arrested in Idaho with a load of freshly harvested hemp on its way from Oregon to a processing plant in Colorado just weeks after the hemp measure was signed into law.

Incidents like that leave most of us scratching our heads, considering that hemp is now legal at the federal level and hemp-derived CBD is a harmless molecule that is naturally produced in our own bodies when we’re young.

Let’s face it, legal hemp seems to be an oxymoron. Minutes after the hemp measure was signed into law, the FDA blindsided the elated industry with its stern warning that only one CBD product has ever been approved for sale in the U.S. and that all other hemp CBD products would remain illegal to sell until they can be approved by the FDA. The only exceptions would apply to the manufacturing and sale of CBD limited to states that had included CBD provisions in their state marijuana policy measures.

But that’s a Catch 22, as I’ve mentioned before, since most state ballot measures never bothered to name hemp CBD in their bills because it was already thought to be legal and had been readily available online from anywhere in the U.S. ever since the 9thCircuit Court of Appeals deemed foods containing foreign-grown hemp derivatives legal in all 50 states back in 2004.

It wasn’t until the end of 2016, when the DEA assigned CBD its own controlled substance code to separate it from marijuana in Schedule 1, that the legality of hemp CBD was called into question. That surprise move caused a reversal on the 9th Circuit’s 2004 rule and a subsequent cascade of new policy restrictions on the industry including policy reversals in states like California, which also never named CBD under their marijuana legalization measures. Ironically, while hemp-derived CBD is illegal to sell in consumable goods in California, CBD derived from the marijuana variety of the cannabis plant is legal to sell in that state.

Despite the fact that Congress intended to legalize hemp, including all of its derivatives, in all 50 states, the measure may have inadvertently made matters worse – not just for the industry, but also for the patients who have come to rely on CBD for health reasons. Taking oversight away from the DEA and handing it over to the FDA seems to have opened Pandora’s Box. Whereas the DEA had far more important things to do than police the CBD industry after it became coded as a controlled substance, the FDA seems hell-bent on policing the industry as if CBD were an opiate, and as if they have nothing more important to do.

The FDA has put the industry on notice that CBD, even from hemp, will continue to be considered a controlled substance from their purview. And, as such, they will continue to maintain that it is illegal to sell CBD-infused foods and beverages without FDA approval, that it is illegal to make or sell hemp CBD extracts in states that haven’t specifically legalized it, and that transporting it interstate is a federal offense. It is only a matter of time before the FDA starts shutting down companies that sell any CBD-infused foods and beverages outside of those parameters or across state lines.

So, if the future looks bleak for the CBD industry, take heart! There are work-arounds to overcome the new FDA rules. But as you will learn in this episode, that will require some action on the part of everyone who has an interest in a legal CBD industry, patients and producers, alike.

That’s the topic of today’s show and FDA attorney Rick Ball is here to down on some of the steps we can take to push through the FDA’s stone walls and make sure that the light at the end of this regulatory tunnel doesn’t turn out to be the headlight of an oncoming train.

Here’s a call to action:

1. Read the statement from FDA Commissioner Scott Gottlieb, MD regarding the upcoming FDA hearing about pathways regulating CBD products on May 31st.

2. Submit commentary to be considered at the May 31st hearing.

3. Listen to this interview with FDA attorney Rick Ball for more!

Frederick (Rick) R. Ball is an attorney at the Boston law firm Duane Morris, where he serves as the Team Lead of the firm’s Life Sciences/Biotech industry group, and is a member of the firm’s Cannabis industry group. In this capacity, he helps pharmaceutical companies, biologics manufacturers, medical device manufacturers, contract service providers, food companies (including supplement manufacturers), pharmacies, long term care providers, and other health care providers navigate the complex challenges faced by state and federal regulation of their industries including complying with current Good Manufacturing Practices, price reporting (AMP, AWP, ASP, etc.), the Foreign Corrupt Practices Act, False Claims Act, and Anti-Kickback Statute, as well as meeting labeling and advertising requirements. As a 1996 cum laude graduate of Cornell Law School and a graduate of the University of Colorado at Boulder, he is a member of the Massachusetts and Illinois State Bar Associations, the Seventh Circuit and U.S. Supreme Courts, Rich specializes in cannabis compliance issues as well as administrative, civil and criminal matters having to do with the FDA, FTC, DEA, CMS, OIG and other federal and state regulatory agencies.