Legislation for a Healthy Nation: The Industrial Hemp Farming Act 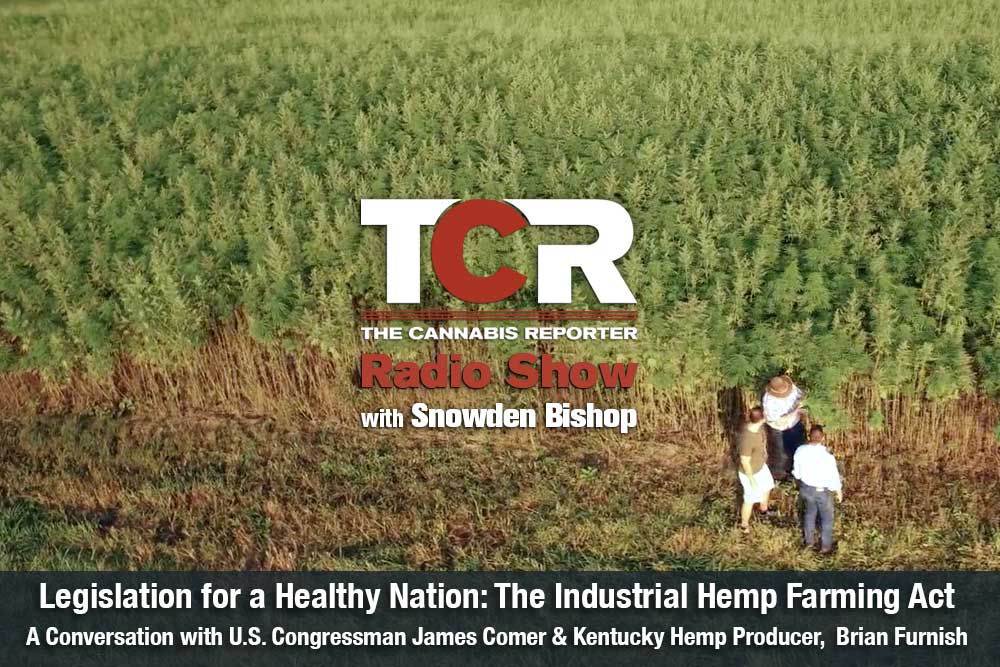 In today’s show, we are continuing with our most recent series on hemp. Congressman James Comer joins Kentucky hemp producer Brian Furnish to discuss the latest iteration of the Industrial Hemp Farming Act. Before I get to that, I we set the stage with some historical context and briefly explain why hemp is still illegal to grow in the U.S.

Some hemp historians attribute hemp prohibition to racial bias, fear of immigration and cultural inequities prevalent during the era. Others blame an equally sinister conspiracy to eliminate competition for fossil fuels – including lumber and petrochemicals, which eventually replaced hemp as raw materials used for making plastics, rope, composites, textiles and paper, to name a few.

Whatever the reasons, hemp prohibition was devastating to the American Farmers who had until then enjoyed lucrative returns from the resilient cash crop. The most disturbing aspect of cannabis prohibition is that the federal statute under the Controlled Substances Act had omitted any distinction between industrial hemp and the psychotropic variety of marijuana. Why, remains a mystery.

There have been a number of attempts in Congress to pass legislation to legalize industrial hemp. Unfortunately, none have passed, perhaps due to a lack of awareness about the difference between hemp and marijuana, or influence by lobbies or other political reason. Before prohibition, farmers in Kentucky were by far the greatest producers of industrial hemp – and they have the most to gain if and when hemp prohibition ends. Foreign hemp is one of the fastest growing sectors of goods being imported into the United States. As long as hemp remains a controlled substance, American Farmers have been shut out of the billion dollar industry.

That’s something todays guests are trying to change via legislation known as the Industrial Hemp Farming Act. Introduced by Congressman James Comer (R-KY),  H.R. 3530 has dozens of co-sponsors and bi-partisan support, which gives it a much better chances of passing than any other hemp bill introduced in the past.

Congressman James Comer (R-KY) represents the 1st district of the State of Kentucky in the U.S. House of Representatives. He entered the business world in 1993, when he took out a loan to purchase his first farm. Today, Comer Family Farms, is one of the largest in south central Kentucky. Congressman Comer served for six terms as a member of the Kentucky State House until 2011, when he was elected to serve as Kentucky’s Commissioner of Agriculture. As a fierce advocate for hemp, he recently introduced a new iteration of the Industrial Hemp Farming Act, as H.R. 3530. Congressman Comer urges those who support legalization of industrial hemp to call upon representatives to support the bill. He welcomes listeners to contact him with questions and suggestions.

Brian Furnish is the President of Global Production at Ananda Hemp, where he is responsible for the oversight and alignment of U.S. farmers to ensure sustainability and security of production. As an eighth-generation tobacco farmer from Kentucky, Brian has been an instrumental player in establishing the legislation that has seen the legalization of industrial hemp in the U.S. and Kentucky. Brian has deep experience in Washington, D.C., working with a range of congressional staff members to guide and support the new Congressional hemp measures. Brian served as the former Chairman of the Kentucky Hemp Industry Association and has held a range of directorships across agricultural organizations. Brian holds a B.A from Eastern Kentucky University.

We’d like to thank Congressman James Comer and Ananda Hemp’s Brian Furnish for a truly engaging conversation. If you support hemp legalization, please let your Congressional representatives know. If not for the generosity of our supporters, we wouldn’t be here! We’d first like to thank our sponsors Hemp Meds and Healthtera. We’d also like to shout out to our producer, Ed Vanderlee at Star Worldwide Networks, Erik Godal, the composer of our theme “Evergreen,” Steve Webb at XRQK Radio Network, Dr. Bryan Doner for the Medical Marijuana Minute and Compassionate Certification Centers for helping us spread the word. We are grateful!