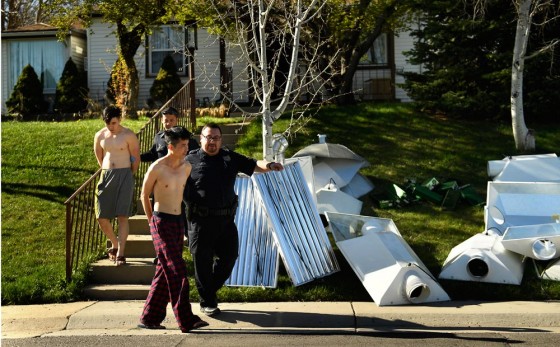 A source with knowledge of the investigation said the operations spanned locations from south of Colorado Springs to the north Denver metro.

The source said the searches — at about 30 locations — were all linked.

Several arrests have been made, according a Drug Enforcement Administration spokesman who declined to comment on the details of the raids.

The spokesman said the North Metro Task Force, a multi-jurisdictional law enforcement organization that targets drug trade, is the lead agency on the case.

The DEA and the task force both said the case is being prosecuted by the Colorado Attorney General’s Office. State prosecutors on Thursday, however, declined to speak about the investigation.

“The AG is not commenting on an ongoing operation,” Roger Hudson, spokesman for Attorney General Cynthia Coffman, said in a text message to The Denver Post.

Search warrants in the case have been sealed.

The El Paso County Sheriff’s Office and Denver police said their officers assisted in the operation.

Jacqueline Kirby, a spokeswoman for the sheriff’s office, declined to say what federal agents were looking for but that warrants were served at multiple locations.

The raids come as federal and state authorities are working to crack down on marijuana being grown in Colorado and then being shipped out of the state.

Colorado U.S. Attorney John Walsh said one of his priorities is to ensure the state doesn’t become like northern California, which he said was known for producing pot sold across the nation. He explained that his office has been in close talks with Gov. John Hickenlooper’s staff about preventing such a scenario.

“We are working very hard to make sure Colorado doesn’t assume a similar role in marijuana trade,” Walsh said.

Some illegal home grows have been discovered after residents called police to report marijuana smells.

“Even one plant, if it’s near the end of its flowering cycle and you’re not using odor control, you can smell it,” said Brian Ruden, who owns the Starbuds cannabis chain that is comprised of six stores and three grow houses.

At a home on the 2700 block of W. Archer Place in southwest Denver, the site of one of Thursday’s raids, the smell of marijuana lingered after officers stacked piles of cannabis plants and grow materials on the sidewalk.

Several men were led from the house in handcuffs by Broomfield police officers.

Joshua Bower, who lives next to the raided home, said he heard loud bangs at the home about 5 a.m. and then saw a swarm of officers move inside. Authorities pulled out large quantities of pot.

Bower said he knew his neighbors were growing marijuana, but not the quantity that was removed by officers.

“I definitely didn’t know it was at that level,” he said. “You could smell it.”

Bower said one clue to the operation next door could have been when a transformer exploded in the middle of the winter.

Marijuana leaves were still strewn in the sidewalk outside the house about 11 a.m., though authorities had left. A front window was smashed and blue rubber gloves were left on the porch.

“They didn’t cause any problems or anything,” Bower added. “They just had a whole bunch of weed in their house.”