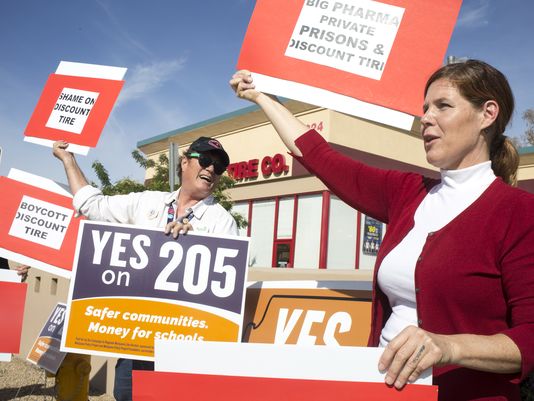 A group of protesters gathered with signs outside a Discount Tire Co. in Phoenix on Thursday morning to show their opposition to the Scottsdale-based company’s donation to the anti-marijuana legalization campaign.

Discount Tire recently donated $1 million to the campaign opposing Prop. 205, which would make marijuana legal for recreational use in Arizona.

Prop. 205 proponents were angered by Discount Tire’s large donation, taking to Discount Tire’s Facebook to express their opinions. Many said they now would take their business elsewhere.

Protesters were at the Discount Tire on 18th Street and Camelback Road, holding signs that read, “Shame on Discount Tire – $1 million to the Black Market” and “Boycott Discount Tire yes on 205” on Thursday morning.

The protest was organized by MomForce AZ, a non-profit organization made up of volunteers that advocate for the legalization of marijuana.

“These folks, I believe, are deceptive because people know that marijuana is safer than alcohol,” Kathy Inman, executive director of MomForce, said. “So to contribute to something that is obviously deceptive is unfortunate.”

Inman said by protesting, MomForce was trying to raise awareness of the benefits of Prop. 205 and the scope of opioid abuse, which often begins with addiction to prescription pain pills.

“I believe these guys are standing in the way of our health and they’re helping the opioid-overdose epidemic that we’re having by funding these lies,” she said.

Gov. Doug Ducey and Discount Tire fail to recognize the facts about legalizing marijuana, she said.

“My feeling is that if you are giving a million dollars to some cause, you should look into it,” Inman said. “We feel that it’s a last-minute push to help their friend Governor Ducey, who in my opinion is head of the legal drug ring in Arizona.

“Marijuana reduces opioid use by 64 percent. Why the governor is ignoring the facts, I’m not sure, but some say it’s for the pharmaceutical companies.”

Discount Tire did not respond to a request for comment.