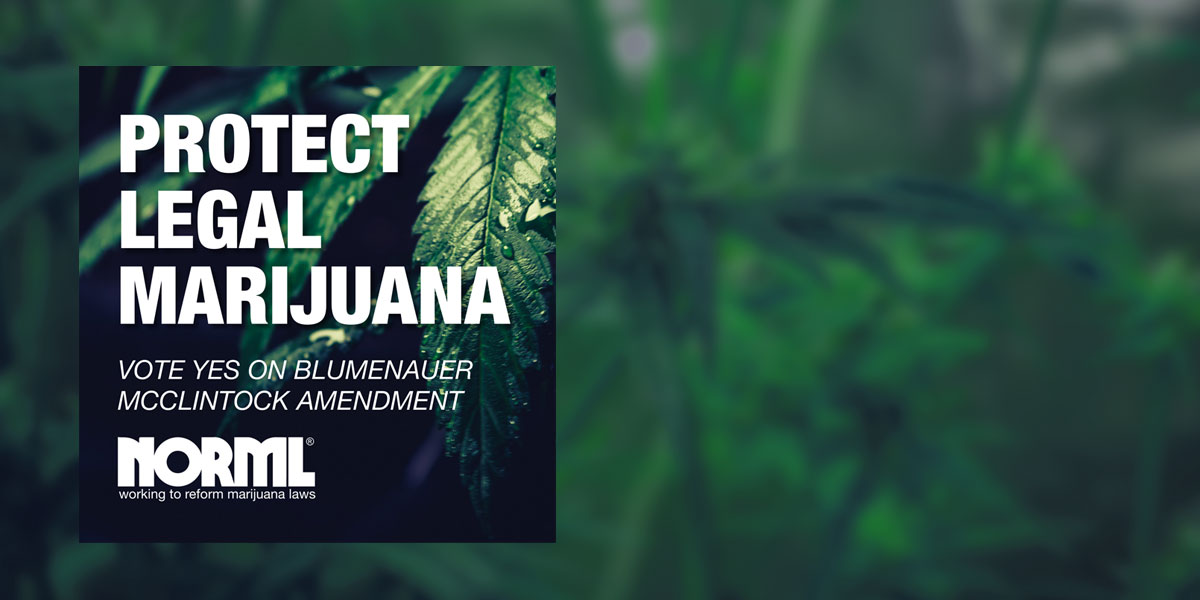 The message from the National Organization to Reform Marijuana Laws, or NORML, is a call to action that couldn’t be more timely or important for those who reside in a state that regulates legal marijuana for medical or adult use:

If you want to protect your right to safely access legal cannabis without threat of interference by the DEA or FDA, call your Congressional representatives and urge them to pass the States Act. Introduced by Rep. Earl Blumenauer (D-OR) and Rep. Tom McClintock (R-CA), the measure is up for a floor vote this Thursday, June 20th.

Please act now and share this with anyone who supports cannabis regulation!

This Thursday, marijuana policy reform could make major progress in Congress. But historic change comes only when Americans demand it.

The Blumenauer-McClintock amendment, would prohibit the Department of Justice from taking any action that impedes state legalization efforts, including use, distribution, possession, or cultivation of marijuana.

This is a simple issue: Should the DOJ be able to destroy our progress or should Congress stop them?

Tell your Member of Congress to vote YES on the amendment and prevent the DOJ from undoing our progress!

Similar protections already exist for medical marijuana laws, now we must expand these protections for the 11 states that have legalized responsible adult-use. Without expansion, citizens and businesses are at continued risk of federal interference. These conflicting laws are unsustainable and Congress must act to resolve this conflict now.

As our power continues growing, a strong bipartisan vote in favor of the amendment will demonstrate that we will no longer be ignored.

Those who support the criminalization of marijuana are now squarely in the minority. Make sure your member of Congress knows you are a part of the majority. Take 20 seconds now to be a part of history!

This is not just about lawmakers in DC. A resounding win in Washington will demonstrate to local lawmakers in the remaining 39 prohibition states that now is the time: time for nationwide marijuana legalization.

Thank you for all your support,

P.S. Our educational and advocacy efforts are supported by thousands of people throughout the country as we work to advance marijuana law reform in all 50 states and the federal level. Can you kick in $5, $10 or $20 a month to help us keep going?