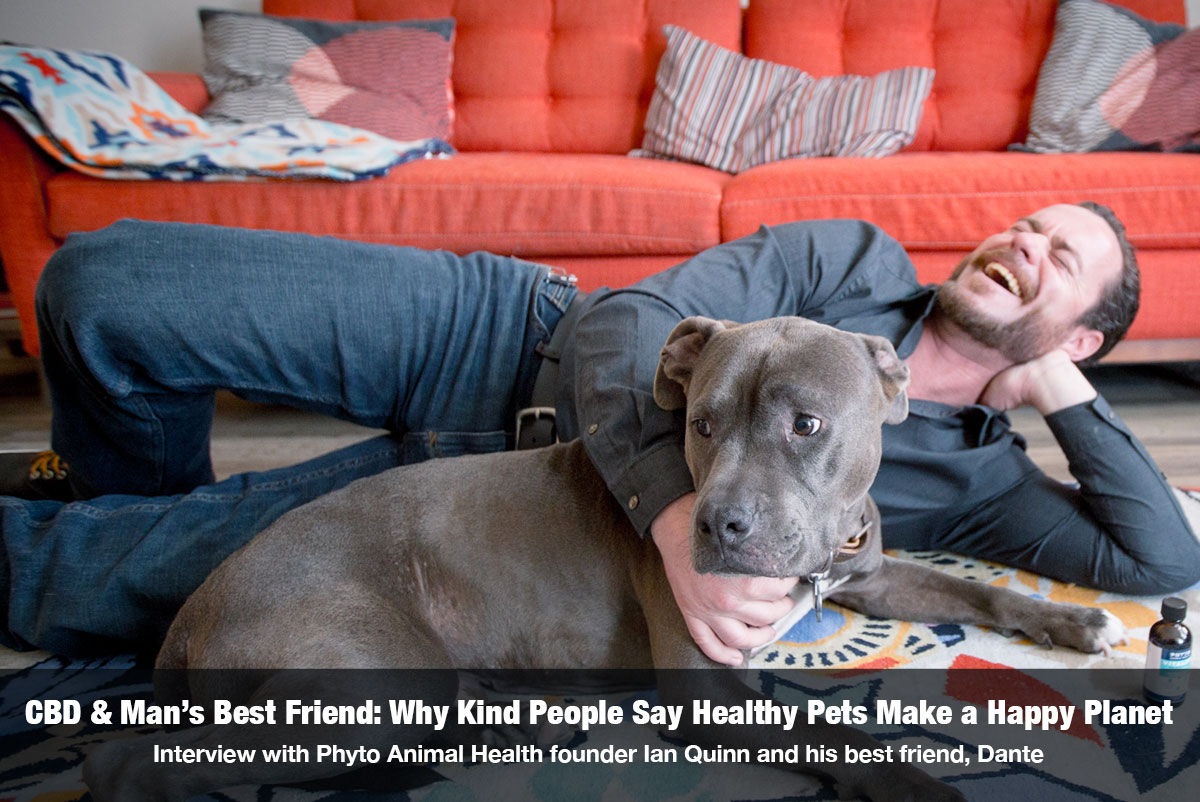 It’s been nearly three years since our very first episode with New York State Assemblyman, Dr. Stephen Katz, who was one of the sponsors of a bill to decriminalize marijuana in his state after having great success controlling his own grand mal seizures with cannabis. But it wasn’t just for himself that he fought to get cannabis out of the closet. He also happened to be a veterinarian, who was one of the first to develop a line of CBD products to help German shepherds who were suffering pain from hip dysplasia. As you can imagine, it took a while for him to convince his patients’ masters that it was okay to give a derivative of cannabis to canines. As it turns out, CBD is one of the very best remedies for dogs and cats for the same reasons it’s good for their masters. Like human kind, all mammals have an endogenous cannabinoid system, which means CBD will work to help them cope with problems like separation anxiety, neurosis, inflammation and pain, just like humans.

But unlike humans, animals can’t voice their pain and they’ll go out of their way to hide it from you – perhaps because, instinctually, they realize that showing pain would make them vulnerable to prey. So, whenever you seen any outward sign of pain, you can be certain that an animal is really suffering, which also means you’ll see a drastic improvement when the pain goes away.

It is especially noticeable with larger animals. Before I knew anything at all about cannabis, I was a documentarian for the Paw Project and spent several days a week filming and working with large, captive exotic species cats a large wildlife sanctuary in California. What was most astonishing is that nearly half of them appeared to be crippled. They would avoid walking on hard surfaces and appeared to cringe when they jumped down from any height. Some were so lame that they would test each step as if they were making sure the ground would hold them. What I learned was that most of them were retired animal actors who had been declawed, meaning an amputation of the last digit of each finger bone where the germinal nail tissue grows. Unfortunately, that also means that the tendons that enable a cat to retract its claws are also severed and, like rubber bands, they retreat into the forearms and take bits of severed bones with them. It only takes two years for the pain and inflammation to cripple a cat to the point it is no longer agile or responsiveness to perform, at which point they are retired to sanctuaries. What’s most sad is that it takes several more years before the pain is excruciating enough for anyone to notice.

Fortunately, the Paw Project came up with a way to reattach the tendons to what’s left of the digits and remove the bone fragments so that the cats can regain the ability to walk without so much pain. During the 10 years I was volunteering there, we repaired the paws of roughly 60 tigers, lions, mountain lions and leopards. Each and every one of them could walk without so much pain almost immediately after. The film footage was proof we needed to convince the State legislature to enact a ban on declawing of big cats, but not until after a long hard battle. We weren’t able to convince lawmakers to pass a similar ban for domestic cats because we were head to head with the powerful lobbyists of the AVMA, which was more interested in protecting the profits of veterinarians. But, there were good Samaritans in the greater Los Angeles, San Diego and San Francisco areas that could be convinced.

There are a several reasons this is relevant today. A.) I can’t help but feel that CBD would help them with the inflammation and only wish I would have known about it back then; B.) It is deeply rewarding to work with organizations that look out for the wellbeing of animals and humans who can’t defend themselves; C.) Like the cannabis activists who have fought to end prohibition, animal rights activists are often fighting ignorance of lawmakers as much as they are fighting the special interests who don’t realize or don’t care that the animals are suffering; and D.) All of the above are topics of today’s show I’ll be exploring with our guest Ian Quinn who happens to be conducting a research study on the efficacy of CBD for treating arthritis in mountain lions! He is here with his best friend Dante, a very handsome rescued pit bull.

Ian Quinn is an educator, philanthropist, and entrepreneur with extensive experience leading global operations for organizations ranging from start-ups to Fortune 500 businesses. He has served as a founding member and VP of global e-Learning non-profit organization and CEO of leading B2B2C pet supplement manufacturer. His journey as founder of Phyto Animal Health begins with Dante the Service Pit and his best friend Ian Quinn, CEO of Phyto Animal Health. The two pals volunteer at their local VA housing program, supporting veterans and teaching them meditation. It was there that Ian learned first-hand about the natural wellness properties of CBD. Looking to provide these same benefits to Dante, Ian consulted with leading veterinarians to create a line of CBD supplements specially formulated for pets. In 2017, Phyto Animal Health was established to encourage pet owners to take advantage of the benefits of CBD and hemp for their pet’s well-being.

If not for the generosity of our supporters, we wouldn’t be here! We’d first like to express gratitude for our radio sponsors, Sunstate Technologies, C2 | ICS Integrated Compliance Solutions, First Direct Financial, Honor Enterprise Fund and Cannasphere Biotech. We are grateful! Many thanks go to Erik Godal for our theme “Evergreen” and Dr. Bryan Doner for the Medical Marijuana Minute. We’d also like to shout out to XRQK Radio Network and Society Bytes Radio Network for broadcasting our show as well as  Compassionate Certification Centers and Cannabis Radio for helping us spread the word online.