Pot and PTSD: Study finally gets federal OK to proceed 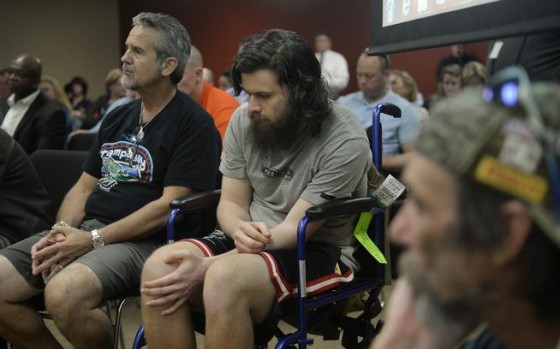 Military veterans across the country will learn whether marijuana can treat post-traumatic stress disorder effectively after a Colorado-funded study received groundbreaking approval from the federal government this week.

The go-ahead from the Drug Enforcement Administration is the first time that the agency has given permission to use raw marijuana in a placebo-controlled clinical trial on PTSD, according to the study’s supporters. Researchers in three states worked for the better part of a decade to win the approval.

“Mostly we’re just grateful that we get to see science move forward,” said Dr. Sue Sisley, one of the study’s leaders.

Sisley and her colleagues plan to start as early as next month enrolling 76 veterans in the study at clinics in Phoenix and Baltimore. They will test how well smoking marijuana of different strains and potencies treats PTSD. All of the cannabis is being supplied by the federal government’s marijuana farm at the University of Mississippi.

Blood samples from the study will be analyzed at the University of Colorado, and a professor at CU’s Anschutz Medical Campus will oversee the research’s scientific integrity.

The project is one of nine medical marijuana studies funded by historic grants from Colorado’s Health Department, and it comes after Colorado officials repeatedly have declined to place PTSD on the state’s list of conditions that qualify for legal medical marijuana use, citing a lack of research. After the state’s Board of Health denied the most recent petition, one angered audience member shouted, “Blood is on your hands!”

Sisley said she isn’t a medical marijuana activist but believes the nation’s swelling ranks of combat veterans deserve to know whether marijuana works.

“The study needs to happen because these veterans have legitimate questions,” she said.

Sisley first began pursuing the study, along with the Multidisciplinary Association for Psychedelic Studies, in 2010. In 2014, she controversially lost her job at the University of Arizona, leaving her without a funding source.

That’s when Colorado health officials stepped in with more than $2 million in grant money to keep the project going.

It still took another year and a half, though, for Sisley and other researchers to navigate the required state approvals and win an OK from the DEA.

“It’s about time,” said John Evans, a Navy veteran and the director of the group Veterans 4 Freedoms, which has advocated nationwide for better ways to treat PTSD. “It’s been a long struggle. She’s jumped through a lot of hoops.”

Sisley’s study is the costliest of the nine funded by the Colorado Department of Public Health and Environment, which in 2014 received approval from the legislature to spend $9 million on medical marijuana research.

Six of the studies are observational, meaning researchers won’t handle marijuana themselves and will only watch for changes in people using cannabis on their own.

All of those studies either have begun enrolling patients or are about to, the Health Department’s Ken Gershman said at a January meeting of the state’s Medical Marijuana Scientific Advisory Council.

In the remaining three studies, including Sisley’s PTSD study, researchers plan to administer cannabis to patients, and that creates a long list of required approvals from state and university officials and multiple arms of the federal government before research can begin.

“It is amazing that anything actually ever happens,” Gershman said at January’s meeting of the complicated approval process for clinical trials on marijuana. “It is not easy. It is not simple.”

As of January, researchers for the two other state-funded clinical trials were still working toward DEA approval, including making the required security upgrades to their labs.

And, even though Sisley has received DEA approval for her work, she and Evans cautioned the study will take some time.

Sisley said researchers expect to spend the next two years enrolling veterans in the study, perhaps at a rate as slow as four or five veterans per month.

They will need more time to collect and analyze data. Results may not be published until 2019.

That timeline makes advocates such as Evans impatient for solutions to a crisis that’s facing veterans right now. But he says it sends an important message to veterans that someone is looking for answers.