Sweet Small Remedy: A Mother’s Bitter Fight to Save Her Child 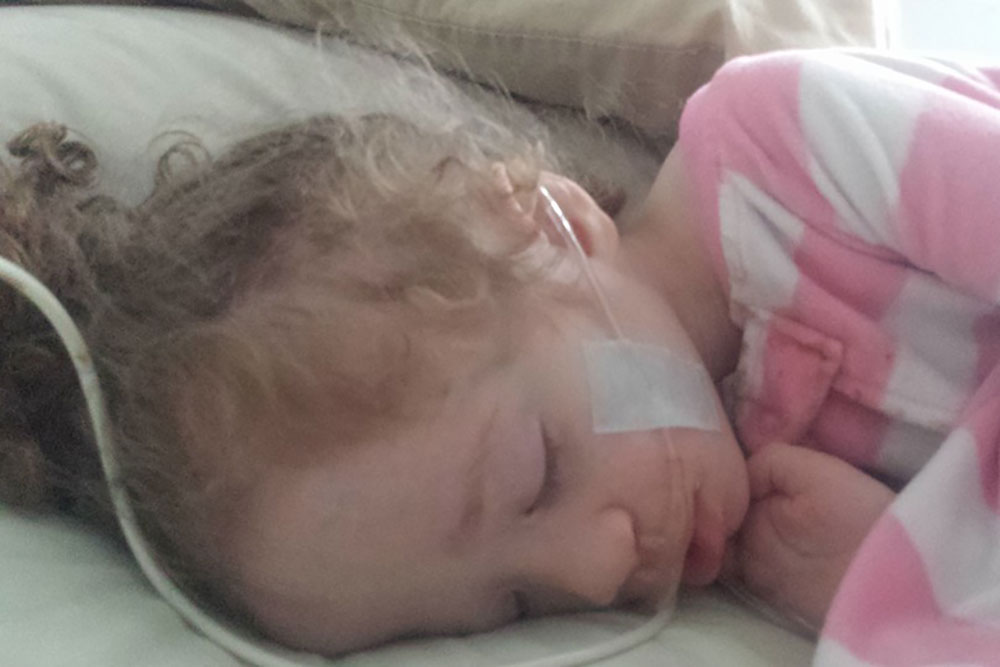 When Sarah Ellett was mid way through her pregnancy, she was told her unborn baby girl would likely not survive after birth. Her daughter did survive, but not without major complications and a number of chronic life-threatening conditions that have yet to be wholly diagnosed. After a seemingly endless struggle to make her child well, Ellett finally found healing in a “Sweet Small Remedy” known as medical marijuana. While the road to recovery has lessened the terror of helplessly watching her child suffer, Ellett is now faced with another terror. In order to provide her daughter with the treatment she needs, Ellet must choose the lesser of two evils: break the law and risk losing her seven children to Child Protective Services; or uproot her entire family and move to a state where her daughter can legally get the only treatment that has ever worked.

Remie Miette, a name Ellett said means “sweet small remedy,” was born with multiple serious birth defects including cleft lip and palate, partial blindness in one eye and life-threatening adrenal deficiencies due to then unknown causes. Elliott knew within weeks that her daughter also had no pituitary function. Since then, she has been in and out of hospitals, endured multiple surgeries, and seen countless doctors who prescribed a variety of medications including morphine to manage her pain. During that time, she was also diagnosed with diabetes insidious, asthma and oxygen deficiencies due to chronic respiratory problems, which began in 2013 with frequent lung infections of unknown origins.

“Remie has several physical features I’d like to mention such as a different crease pattern on her palms, shorter fingers, a small birthmark near her collarbone, a small closed sacral dimple and hydronephrosis [a very painful blockage between the kidneys and bladder]. She has a mild hearing loss and ear tubes. Her optic-nerve has a very distinct coloboma. She also has a Chiari I malformation,” said Ellett. 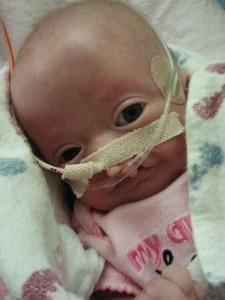 Despite the battery of tests by a multitude of specialists including pulmonologists, gastroenterologists and a geneticist, the underlying causes have yet to be wholly diagnosed. Not only has conventional medication failed to treat her, the Ellett family recently learned that some of the medications were actually making her already life-threatening symptoms even worse. Furthermore, several misdiagnoses have resulted in more medication, one of which Ellett learned caused her daughter to go into respiratory arrest. “The first geneticist who saw her suspected and diagnosed Remie with CHARGE syndrome even after the testing came back negative. I asked the doctors to reconsider her diagnosis since I had studied it myself and their passive refusal to consider my requests was bothersome.”

Eventually Ellett took matters into her own hands and began to research and reach out to others with children suffering from similar symptoms. After speaking with a father whose six-year-old son suffered similar adrenal deficiencies, she learned that the boy was born without a pituitary gland. Doctors later confirmed that Remie’s severe adrenal deficiency was due to panhypopituitarism, meaning she too was born without a pituitary gland. After her endocrine system was regulated by medication, other persistent symptoms remained undiagnosed. More research revealed the unknown conditions could be related to the exocrine system, glands that support digestion and the body’s ability to eliminate toxins.

“That’s when I started to consider her baby formula. I researched and discovered online that her formula had been known to cause respiratory issues in many babies, even respiratory arrest! That might explain the chronic lung disease and asthma and increased need for oxygen,” said Ellett in a journal. She learned that high-fructose corn syrup and palm oil, both top ingredients of most baby formula, may be exacerbating, if not causing Remie’s condition. Studies have linked high-fructose corn syrup to autoimmune disorders, and palm oil has been known to interfere with digestive enzymes and absorption of nutrients in the intestinal tract. After researching brands and finally finding one free of both ingredients, Ellett decided to slowly transition Remie to the new formula, she said, “with the blessing of our gastroenterologist and pulmonologist after they recognized [Remie] sounded and looked better [since seeing] her in January 2014.”

Ellett also recently learned that the asthma and severe respiratory complications were caused by a combination of food allergies and the extraordinarily high volume of medication she was taking to treat all of her other chronic conditions. “She would turn blue and become acutely ill, sometimes just dropping over after appearing to be okay. Calls to 911 and trips to the ER were becoming frequent.”

Throughout Ellett’s struggle to save her child’s life, she has also had to deal with issues related to her own genetic condition, Polypsis syndrome. In early 2015, she discussed her thoughts about the connection between her family’s genetic disease and Remie’s metabolic conditions with a good friend from another state. In a journal about her experience, Ellett writes, “Upon [reaching] consensus that metabolism is greatly affected by the syndrome… my friend looked right at me and said, ‘Your entire family needs cannabis!’ It wasn’t an [unusual] for us to discuss cannabis benefits and wonder what it can help specifically. This time her statement was stronger and defined by absolute certainty.”

Her friend, an advocate of medical marijuana, had first-hand knowledge about the benefits of cannabis. Clearly, none of the conventional treatments prescribed by the long list of Remie’s physicians was making her well. Ellett eventually decided to try administering drops of a high CBD oil with only trace amounts of THC at a level consistent with that of industrial hemp. For the first time in young Remie’s life, she began to show signs of actually healing. However, Ellett faced another problem; medical marijuana is still illegal in the State of Utah and a minor possession charge could carry a six months sentence if convicted.

According to a recent article in Alternet, “In response to growing demand for medical cannabis legislation, Utah legislators passed H.B.105 in 2014, which legalized high-CBD medical cannabis extracts so low in THC they can be arbitrarily classified as industrial hemp. Remie does not qualify under the law, nor would her medicine.” Another compassionate medical marijuana bill, which would have allowed Remie to get the cannabis treatment she needed, was proposed in Utah and defeated. Coincidentally, the representative from Ellett’s district voted against the proposed law.

In another recent article in Yahoo! Parenting News, author Beth Greenfield said, “In 2015 state Sen. Mark Madsen’s medical cannabis bill was one vote shy of clearing the Utah Senate. Since then, according to the D.C.-based Marijuana Policy Project, momentum has continued to build with Gov. Gary Herbert, who has said he would sign compassionate medical cannabis legislation. But nothing is imminent, leaving Ellett to make the difficult decision of whether to move to Colorado or another state where medical cannabis is legal for children — like so many other desperate families around the country have chosen to do for their sick kids.”

Determined to find a legal way to get the treatment Remie needed, Ellett researched options and learned that Oregon, which had just legalized all forms of marijuana, allowed people from prohibition states to get treatment without having to be an Oregon resident. She decided to take Remie to Oregon to see if the treatment would work. According to Ellett, Remie immediately showed signs of improvement.

“Once she started taking the cannabis, she actually began walking. It wasn’t the first day, but close,” she said. “And it wasn’t just a little. She actually took 20 steps. I took video. It’s fun to watch.”

For the first time in her young life, she began talking and playing as a child should. Remie has been on the road to recovery ever since. 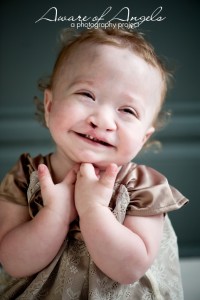 “I am happy to report she is doing much better, so much that people have remarked to me that they can see she truly needs it,” Ellett wrote in her online chronicle of Remie’s journey. According to Ellett, the high-CBD extracts worked and she decided to continue the treatment, with the blessing of her gastroenterologist and pulmonologist after they recognized she sounded and looked better than they’d ever seen her in January 2014. However, Remie still has a long road of recovery ahead. “She still had difficulty with respiratory viruses, her asthma or when gagging on secretions but the frequent and drastic life-threatening events that went on for many months have decreased to a more stable pattern which don’t include the daily throwing up,” she said. In her online chronicle she said,

Unfortunately, the non-resident cannabis patient program expired in January of 2016, which meant that Ellett could no longer legally continue the CBD treatment there. According to Ellott, Remie’s health began to noticeably deteriorate dramatically after returning to Utah, enough that it became evident that Remie needed her CBD medicine to function. It was a calculated risk to resume treatment, but one she was willing to take if it meant saving her child. “I would rather face the legal risks than to see my daughter face the consequences of whole-plant deficiency. I hope it doesn’t come down to that.”

Compounding the legal risk, Ellett also faced the ultimate threat of losing her children, which became evident when she receive an unexpected visit from the Utah Child Protective Services following up on an anonymous tip. The controversy has also attracted media attention, some of which is critical of her decision. She recently told the Salt Lake City Tribune, “I never wanted to be an activist or to be on the news. I only want what is best for my children. There are few situations as scary for me as when I saw my Remie made into a meme that said ‘pothead.’ Nothing could be further from the truth.”

Since Oregon non-resident program ended, should couldn’t legally treat Remie there without first becoming a resident. Since stopping treatment was just not an option, Ellett was forced to take her daughter to an undisclosed state where it’s legal to treat minors with high-CBD cannabis so that she could continue treatment without jeopardizing her family.

In the meanwhile, she’ll remain out of state until her most recent pleas to the Utah governor and state senators result in passage of a more compassionate medical marijuana law. If the state Senate passes a legislative measure, the Governor has indicated willingness to sign it into law.

“We need this bill to pass. We need whole plant access,” Ellett said. She also urges people to support her efforts by sharing the information and urging representatives to reform marijuana laws.  “If legalization doesn’t happen we will be forced to permanently move.”

Editor’s Postscript: We recently received word that Remie is doing well on her CBD treatment and all of the Ellett children are now enrolled in school in Oregon, where Remie can legally continue to receive the treatment she needs. The Ellett family maintains a FaceBook page for Remie called Sweet Small Remedy and a campaign at GoFundMe.com to raise money to assist with the cost of Remie’s care. Click here if you’d like to make a donation. Sweet Small Remedy and the entire Ellett family are in our thoughts and prayers.

Editor’s Update, June 21, 2016: I had the pleasure of speaking with Sarah Ellett during the interview, “3 Moms, 3 Miracles and a Foot Soldier on a Cannabis Crusade” discussing the struggles of antiquated laws. Click HERE to listen to the podcast.

Photos courtesy of the Ellett family and Aware of Angels, a nonprofit that connects parents of children with special and rare diseases with resources that can help.