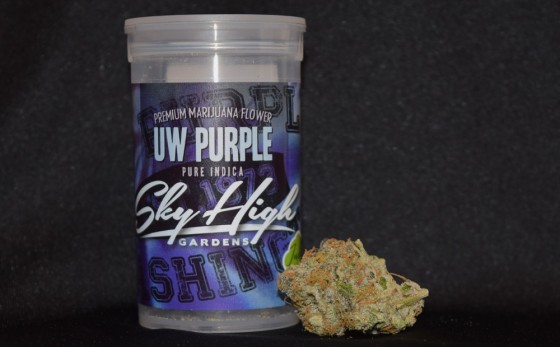 By Sohum Shah, The Cannabist Staff

I am lucky to be able to travel for work to places that have varying degrees of legal marijuana.

One of my favorite cannabis industry events is the intimate Cannabis Grand Cru. This particular trip brought me back to Washington state, in the Fremont area of northern Seattle. My last CGC trip to the Pacific Northwest led me to the shop Ganja Goddess, where I found the sublime Snoop’s Dream. So I knew I wanted to use this trip to delve deeper into Washington’s recreational flower.

Before I left, I scouted some potential shops. I had heard good things about Uncle Ike’s Pot Shop from industry friends who work in Washington, and the vast selection on their website was enough to convince me that I found my shop.

After we landed and checked into our Airbnb, I looked up Uncle Ike’s. With Friday evening rush hour in full swing, Marie (my travel buddy and fellow speaker at CGC) and I decided it was too far to make the trek. It was a pleasant, sunny evening so I looked up walkable shops. Nothing stood out — until I saw Hashtag Recreational Cannabis. The name of the store spoke to my #millennialsensibility and I was #sold!

We headed out for a 15-minute walk that took us past the infamous Fremont Troll in this hilly Seattle neighborhood. Here’s a random fact that is probably useless until the decisive final round of your next bar trivia game: The object in the troll’s left hand is an old Volkswagen bug. As we walked, Marie and I quipped about the trendy name of the shop. We hypothesized that a millennial had verbally suggested the name “#RecreationalCannabis” to a baby boomer who took the phrase literally, and thus the store was born. 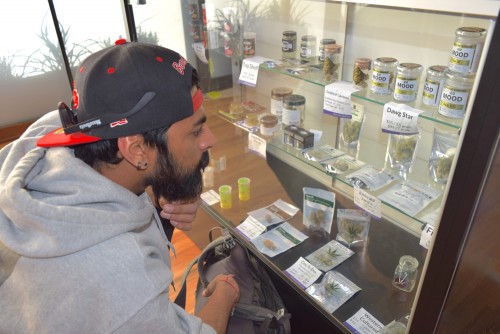 Cannabist strain reviewer Sohum Shah checks out the flower options at Seattle shop Hashtag Recreational Cannabis. Customers are not allowed to open packages in the store to smell the product, so it’s purely a visual inspection. (Marie Graham, Whaxy / provided to The Cannabist)

The spacious shop had multiple display cases and at least five budtenders. After a short wait, we were called up to the counter.

Normally I wouldn’t tell a budtender that I was reviewing product to avoid getting cherry-picked nugs. However, Washington’s rec system does not allow stores to grow any cannabis — a stark contrast from the vertical integration upon which Colorado’s recreational sales system was originally built. In Washington, all cannabis must be purchased in pre-packaged containers from wholesale producers. So I wasn’t concerned about the potential for bias that exists when a budtender is selling me house product. (This is also why the retail experience is so important in Washington — recreational stores sell a lot of the same products and need to differentiate themselves from their competition).

The extremely patient budtender Dom walked me through all of the different flower offerings. When I’m in an unfamiliar store, one of the first questions I like to ask is about the budtender’s personal favorites. Without hesitation, Dom went straight to UW Purple, a heavy indica grown by Sky High Gardens. He explained that it is not always on the shelf and sells out quickly when they have it. His enthusiasm and the local nod to the nearby University of Washington were enough to convince me.

Ingrid: The word Ingrid is slang for cannabis in Austria, where the strain was originally bred — not unlike Mary Jane here in the States. Without knowing the exact genetics of the parent strains, it’s impossible to verify that it is truly a pure indica. But even if it is an indica-dominant hybrid, a bowl of Ingrid’s effects certainly epitomize the “in-da-couch” mnemonic device a budtender teaches you on your first dispensary visit.

Sour Chunk: For complexity of flavor, it has quickly become a favorite, as it challenges your palette like a well-crafted stout beer. Much of that is owed to the Deep Chunk that adds a layer of nutty chocolate and fresh roasted coffee beans behind the mild fuel of the ECSD. It smokes like a city — rich and smoky, addictive in nature.

Purple Dream: The rich, dark grape aromas are like a jar of Welch’s concord grape jelly, but only if you ran out before finishing your PB&J and added in some strawberry jam to get you by. I often describe Blue Dream as “workout weed,” something I desperately needed.

Weed news and interviews: Get podcasts of The Cannabist Show.

I felt a little nervous about the quality of the weed. Retailers are not allowed to open packages in the store. Even though I could visually inspect the bud through the packaging, I wasn’t allowed to smell it before purchasing. For me, the appearance of a nug is marginally important when compared to the smell, so I was essentially shopping blindly. I eventually decided on a variety of indoor and outdoor nugs from different producers.

That evening, the CGC hosted a special screening of “Evergreen: The Road to Legalization in Washington,” a documentary about the fight to pass Initiative 502 in 2012. Following the screening, we rendezvoused with some other attendees for a quick drink. We all wanted a good night’s rest before the conference the next day, so we didn’t linger long.

I figured the indica UW Purple would be a perfect nightcap. According to Sky High Gardens, it is rumored to have been formulated at the University of Washington, although they do not specify the exact genetics. I can certainly appreciate the triple entendre of the name — a reference to the alleged university origin and color of the nug, as well as a nod to UW’s official color.

After asking for permission from the beautiful bartender, Kai, I took out the jar to roll a joint at the bar. The nug was dense, round and extremely frosty with light orange hairs. The leaves were primarily pine green and a shade of dark purple that could have convinced me they tasted like grape soda. In some spots, the trichome coverage was so rampant that the actual color of the underlying leaf was indiscernible.

I buried my nose in the jar and took in the fragrance. The predominant smells were gasoline and cheese, with hints of pine and earth. The gasoline scent was prominent but not overwhelming — like the subtle odor that lingers in your car if you get some gas on your shoe during a fillup. The moisture was just right — it was easy to break up but didn’t crumble to a dust. The crystals left a layer of resin on my fingers. Once I had the joint rolled, I invited Kai and her friend to join me. She politely declined, but her friend was game. We left the bar and found a nearby spot to smoke. 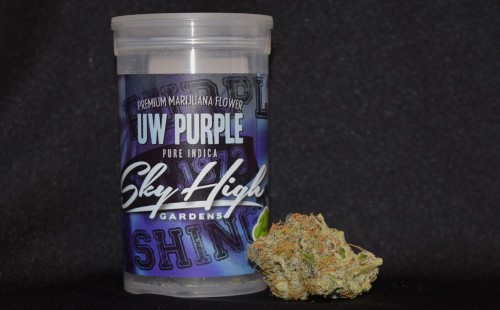 The smoke was mostly diesel with a spicy, piney aftertaste that lingered in the nose and made me cough. Within five minutes, I could feel my entire body, from my eyelids to my feet, succumbing to Earth’s gravitational pull. I hastily said my goodbyes to Kai’s friend (whose name I so rudely forgot thanks to the UW Purple) and stumbled my way into the Airbnb. I miraculously managed to “suit down” and get ready for bed.

Akin to the Ingrid strain that is advertised as “100% Indica” at the Colorado shop Good Chemistry, the UW Purple is labeled as “Pure Indica.” While it’s impossible to verify that it truly is a pure indica due to unknown genetics, the coma-inducing effects eliminated my doubt.

Dom was right on point with this recommendation.

It’s utterly impossible to be “Sleepless in Seattle” when UW Purple is available. 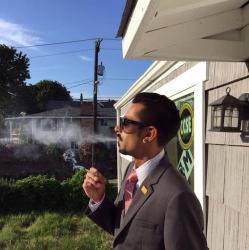 Sohum Shah is the co-founder and CEO of the Cannabis Commodities Exchange. He has worked in and around the Colorado dispensary scene for several years and currently helps organize the Cannabis Tech Denver…