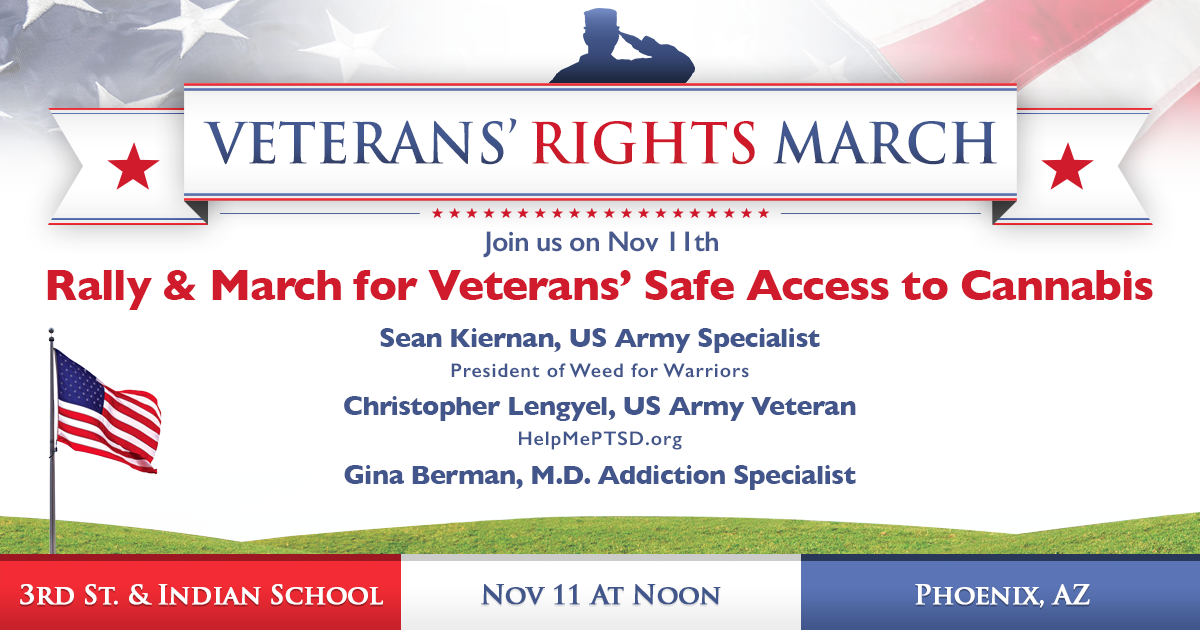 PHOENIX Ariz., (November 6th, 2017) — Recent news of a veteran’s suicide on the grounds of the Phoenix Carl T. Hayden VA Medical Center has brought together a number of advocacy groups dedicated to overturning the agency’s no-cannabis treatment policy. Spokespersons for the groups point out that mounting scientific evidence suggests that cannabis helps veterans cope with the debilitating physical and emotional scars that lead to addiction, overdose, and suicide. However, U.S. military veterans are prohibited access to cannabis for fear of losing their VA medical benefits.

“Veterans have given up so much to protect our freedom. It is simply unacceptable that they are denied the freedom to choose a treatment that works without risking the benefits they’re entitled to receive,” said Snowden Bishop, host of The Cannabis Reporter Radio Show. “That’s the purpose of our rally. The public needs to know the facts.”

The Veterans’ Rights Rally and March will take place at Steele Indian School Park with a march to the Phoenix VA Building immediately following the speakers on Saturday, November 11.

Among the rally’s notable speakers will be Dr. Gina Berman. Dr. Berman, an emergency physician practicing in the State of Arizona for the past 12 years is currently supporting the addiction of PTSD as a qualifying condition to the Arizona Medical Marijuana program.

According to veteran Sean Kiernan, founder of Weed for Warriors, “The United States was losing at least 22 veterans a day to suicide.  Even though multiple studies show declines in suicides and opiate addiction in states where cannabis is accessible, more lives are predicted to be lost.” Weed for Warriors is a nonprofit that advocates for veteran access to cannabis. The foundation is also a first line of defense against suicide and the opiate overdose epidemic.

Veterans and non-veterans alike are urged to attend the rally and participate in the march. “This important event is an essential step in a growing nationwide effort to overturn the VA’s detrimental anti-cannabis policy,” said Bishop.

The Veterans’ Rights Rally and March will commence at noon on Veterans Day, Saturday, November 11th on the northwest corner of 3rd St. and Indian School at Steele Indian School Park in Phoenix. Featured speakers include M.D. Addiction Specialist, Dr. Gina Berman, Weed For Warriors founder, Sean Kiernan, a veteran of the U.S. Armed Forces and Chris Lengyel, U.S. Army veteran, founder of HelpMePTSD.org.  The speakers will conclude at 12:45 with the march to the VA, at 7th Street and Indian School.

Sun Valley Certification Clinic, Harvest dispensaries and cultivation, and Helpmeptsd.org are sponsoring the event. Organizers of the event are The Cannabis Reporter and the Southwest Cannabis Conference & Expo. Supporters including individuals from NORML, Cannabis Radio and other industry organizations are recruiting volunteers, veteran advocacy groups and the public at large to be on hand to provide resources and information to fellow veterans and others attending the rally.

The event is free to the public. To learn more, show support or RSVP, please visit the event page on Facebook.