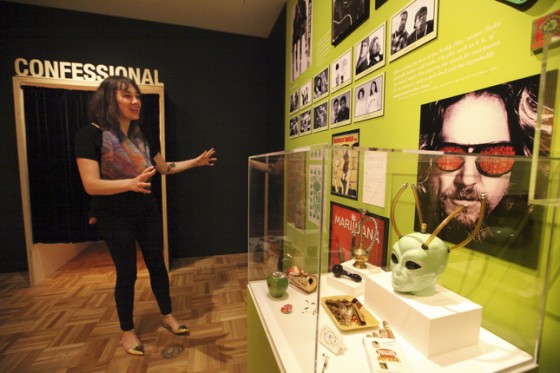 OAKLAND, Calif. — This has to be the first time Wayne, Garth, Cheech, Chong, Craig and Smokey have shared a museum wall.

Yes, the Oakland Museum of California has gone to pot, devoting its entire Great Hall gallery to an exhaustive, high-profile exhibition titled, “Altered State: Marijuana in California,” which opened earlier this month.

But far more than pot pop culture, the exhibit weeds through every imaginable aspect of the complex issue — from medical claims and the “War on Drugs” of the ’80s, to recreational use, conflicting laws, economics, environmental concerns, sacred uses of the plant and, yes, even stoner movies like “Fast Times at Ridgemont High.”

“This is a topic people tend to take very polarizing stances on — and often very personal stances — without really knowing the full story,” OMCA’s director Lori Fogarty said last week during final touches on the installation, where a live pot plant stands as the centerpiece, encased in glass like a prized artifact.

Touted as the first major museum show on the topic, the exhibit is a big deal for OMCA, drawing national attention as part of the institution’s ongoing effort to serve as a forum for debate on hot-button social issues.

And timing is everything. California voters may face a ballot initiative this year to legalize recreational use of marijuana. Currently 35 states have medical pot laws, and four states and Washington, D.C., have legalized pot for recreational use. In addition, it was reported last week that the Drug Enforcement Administration may consider changing the federal status of marijuana, which could ease restrictions on medical research.

While it’s clear the debatable bud produces plenty of strong opinions, hard facts about its use, its effects, its medical efficacy — plus its cultural, legal and political significance — often become clouded in urban lore.

So a museum team, led by exhibition curator Sarah Seiter, embarked on a nearly two-year, journalistic-style quest, completing dozens of interviews, digging up records and working with about 100 collaborators to come at the topic from every aspect imaginable.

They culled the wealth of information into 10 clear-cut subsets of displays, from a section on environmental impacts of growing a thirsty agricultural crop in a drought state to pot as a business, displaying various products like THC-infused hand lotion and cannabis treats — for pets with anxiety.

There’s a walk-in art installation titled, “Creative Grass,” by Oakland artist Cybele Lyle with projections of crashing waves and sunny days, playing with altered perceptions of time and space. In a section titled, “Criminal Dope,” visitors learn about arrest rates for marijuana possession, which vary with race and location. A wall of history called “Bad to Badass” starts with factoids about California as the first state to outlaw marijuana in 1913, moving on through the 1937 Marihuana Tax Act, touching on Beatniks and the ’60s counterculture, the ’80s anti-drug campaigns (did you know Nancy Reagan’s “Just Say No” effort was launched at Oakland’s Longfellow Elementary School?) and on to medical marijuana laws and currently evolving attitudes.

Possibly the most revealing section is the mock medical lab. Sterile white counter tops and cupboards serve as a backdrop to a presentation of scant research on marijuana’s beneficial effects.

“We took eight different research studies, summarized documents, noting sample size and findings, and we’ll let people go through them and make up their own minds,” Seiter said. Because marijuana is currently listed under the 1970 Controlled Substances Act as a Schedule 1 drug — the most restrictive-use category — access to approved samples for medical research has been limited.

“So when people say there’s proof of marijuana doing this or that — lots of claims, from things like it causes schizophrenia to it cures cancer — there really isn’t much real research out there,” said Seiter, who is also the museum’s associate curator of natural sciences.

Despite these serious elements, the pop culture aspect couldn’t be ignored, she added, pointing to glass cases with items such as brownies, various vaporizers and bongs — even one shaped like a big green space-alien head. “And we’ll be stocking the museum’s vending machine with snacks related to the munchies, like Cheetos and Funyuns.”

There are also interactive displays, but don’t expect a smoking lounge. Visitors can post notes on a board of thought-provoking questions related to legalization of recreational use. Things like, “What if marijuana were advertised on TV?” Or “What if there were dangers to the environment?”

And you can make use of the “Cannabis Confessional,” a booth behind a black curtain, where you can anonymously share your true pot persuasion. A test-run of the confessional last summer resulted in dozens of revealing comments. Things like, “My confession: I smoked every day for the past 20 years and it’s the only thing that calms my brain,” one person wrote. “Weed has gotten too strong! It was more fun when 1 puff didn’t render me stooo-ped,” wrote another, followed by “My girlfriend smokes every day and I wish she didn’t. It makes me not want to start a family with her. But I love her.”

So far, feedback about the upcoming show has been positive, Fogarty said, but she ultimately expects to take some hits.

“I’m sure we’ll get some pushback, some concern,” she said. “Someone asked if we should put a warning on the show. Well, there’s a huge picture of a marijuana plant on the entrance, and the title is pretty clear. We expect those will cue what it’s all about and you can make your choice from there.”

What: Oakland Museum of California’s groundbreaking exhibit, “Altered State: Marijuana in California,” is considered the first major museum exhibition to focus on the topic, set against the backdrop of a likely California ballot measure in 2016 to legalize recreational pot use. The show features artwork, political posters, scientific displays and interactive exhibits all meant to provoke dialogue about the provocative plant.

This story was first published on mercurynews.com