Who’s using Colorado as a base for illegal pot grows? 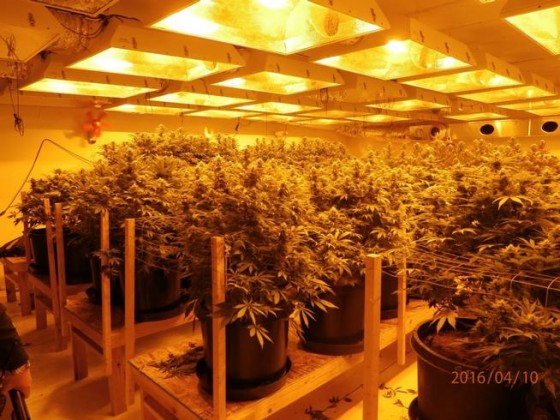 The uptick in these so-called “pirate grows” has become a priority for federal, state and local law enforcement agencies, who have dedicated resources to quashing the trend.

“We’ve seen more and more of it,” said Tom Gorman, director of the Rocky Mountain High Intensity Drug Trafficking Area. “When we first legalized marijuana, we saw pockets of it — a lot of Colorado people growing illegally for the black market. Now, you’re seeing a lot of people coming in from out of state to hide behind the legal market.”

“It’s gotten really out of hand,” he added.

While many of these illicit operations have gravitated to areas around Pueblo and Colorado Springs, the problem spans the state, including the Denver area, investigators say. Criminals set up shop in homes they rent or buy, then quickly begin cultivating hundreds, or even thousands, of plants.

Law enforcement flexed its muscle Thursday morning by raiding about 30 locations — many of them homes — between El Paso County and the north Denver area as part of an operation targeting a pot trafficking organization.

In each case, the county sheriff’s office found the residents were from out of state — many with international ties.

“Their plan is to send it out of state,” said Pueblo County Sheriff Kirk Taylor. “That’s well-documented.”

The rise in these pirate grows coincides with a similar boom in massive illicit outdoor pot cultivation operations, a number of which were discovered in the past year on federal land. In several of those cases, federal authorities arrested Mexicans on felony drug cultivation charges.

The illicit house grows, however, provide a year-round way to produce higher-quality pot as opposed to the weather-dependent method of planting marijuana out in the open and hoping it is not discovered as it matures.

“Now, instead of public land grows, they are coming into communities,” Taylor said. “They are buying and renting homes and putting these (grows) in basements and garages.”

From March 30 to April 10, 12 people — all from Florida — were arrested as part of the Pueblo-area raids that resulted in the seizure of some 2,400 marijuana plants. Five of those suspects originally were from Cuba, authorities say.

In one of the raids during that span, deputies also seized 67 pot plants from a Pueblo West home inhabited by two Russian immigrants who recently moved to the area from New York.

Many of the operations were prompted by tips from the public. One came after authorities in Texas stopped a vehicle full of marijuana grown in Pueblo.

“They can kind of hide in plain sight,” said Barbra Roach, special agent in charge of the Drug Enforcement Administration’s Denver division. “They don’t try to abide by the law in any way. For a while, they were going into warehouses. Now they are just going into homes.”

Roach said the unintended consequences of the illicit grows can be vast, from fires to water pollution to devaluing rental property.

Walsh said the DEA has been working with local police departments and sheriff’s offices to address the problem. He pointed to an operation last year that targeted 20 people in southern Colorado’s Fremont and Custer counties accused of harvesting marijuana at eight properties and shipping it to Florida via UPS.

Federal agents and local police confiscated 28 guns, more than $25,000 and 50 pounds of processed marijuana as part of that case.

“We probably have more substantial marijuana trafficking cases in this office than we have ever had,” he said.

Some illegal home grows have been discovered after residents called police to report marijuana smells.

The Thursday morning operations targeted at least one Denver home that was nestled in a neighborhood near the intersection of Federal Boulevard and West First Avenue. Neighbors say officers dragged out stacks of marijuana plants and growing materials.

Those living nearby knew the residents were cultivating pot — partly because of the smell — but were surprised by the amount seized from the home.

“They didn’t cause any problems or anything,” said neighbor Joshua Bower. “They just had a whole bunch of weed in their house.”

But in Huerfano County, just south of Pueblo, Sheriff Bruce Newman said he is worried about the potential of violent crime accompanying the increase in illegal pot grows he’s seeing.

“There’s a lot of people coming from out of state,” he said. “It’s getting to be a pretty big trend.”

An intruder was killed at a home about 20 miles west of Walsenburg on March 14 as he tried to break into a house with a 400-plant illicit cultivation operation where two Florida residents lived.

A Fort Morgan-area man was killed as he and two others tried to break into the rural house near the intersection of Huerfano County roads 520 and 530. Newman believed the intruders were after the illegal pot.

He added: “Anytime there’s money to be made, crime comes with it.”